When Injustice 2 was first announced, everyone immediately ran to their keyboards to make a character request.

People went nuts over the prospect of seeing Static Shock, Starfire, another Mortal Kombat gust character and DC heroes/villains who are lesser known making it into the game. A lot of those wishes came true in the form of the launch roster and future DLC fighters. We finally got an inside look at the one of the most requested Batman universe anti-heroes for the game – Red Hood! Red Hood looks just as badass as you’d expect and he brings his trusty pistols with him to the super-powered fight. Jason Todd is also a master of close-range maneuvers and has the ability dish out damage via his electrocution abilities. It’s no surprise that he’s seen beating the current Robin (Damian Wayne), the man who killed him (The Joker) and his former mentor Batman to death.

Enjoy Red Hood’s debut gameplay trailer above and prep yourself for a future look at the rest of the DLC roster. 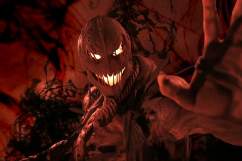