All we have to go off of is the teaser image above. We can assume that it’s about the upcoming Sonic Forces since it’s in 3D and it appears to take place in the game’s version of Green Hill Zone.

What immediately sticks out in the image is the giant robotic leg, which could point to the giant robots seen all the way back in the game’s reveal trailer. There’s also a structure in the foreground too dark to make out and what could be either a long piece of metal debris or a grind rail.

The reveal tomorrow could also point to the game’s mysterious new character. Theories have run the gamut from the Sonic Boom version of Sonic to Bubsy.

How about that mysterious new character in Sonic Forces? Who could it be? Bubsy? Fang the Sniper? Antoine? Maybe I'll make a poll about it pic.twitter.com/kXKFUYwDh3

A release date has not yet been announced but it’s confirmed for 2017.

It’s anyone’s guess what the image could mean. We’ll have to stay tuned until tomorrow. 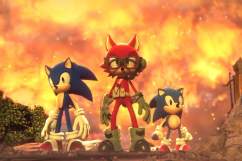