Have you ever watched the Federation officers of Star Trek go through time portals, fight aliens, and run around shirtless with a rapier and said to yourself, “Wow, I would love to do that.” Well now you can with Star Trek Bridge Crew!

Well, you won’t be able to experience the shirtless rapier part. But what this game lacks in offering that it more than makes up for in being a thrilling experience dripping in the atmosphere of Star Trek new and old.

Star Trek Bridge Crew puts you in the role of Federation officers working together to pilot a starship across the galaxy and conduct a variety of missions. This game’s story concerns the Trench, an unexplored stretch of space that may serve as a suitable home for the Vulcans. But the Klingon Empire is up to no good, so it’s up to you and the rest of your crew to secure the Trench for peace across the galaxy.

Star Trek Bridge Crew is predominantly a multiplayer game but can be played in single player. Players are assigned to one of four roles: Helm, Tactical, Engineering, and Captain. Single players take the role of the captain issuing commands to AI-controlled crew while occasionally taking over stations.

Helm controls the ship’s travel and movement and has to maneuver through obstacles and get in the line of sight to attack enemy ships. Speaking of which, Tactical controls the ships weaponry and can scan and target different parts of enemy ships to weaken them. Engineering diverts power across the ship’s engines, weapons, and shields and assigns crew to repair parts of the ship. And the Captain keeps tabs on the objective, plots out destinations, and issues commands to all of the other crew members.

All of the crew members have to work in tandem in order for missions to succeed, often combining tasks to achieve one small goal. In order to warp to a new location, for instance, Engineering has to allocate power to the engines and then warm up the warp coils and then Helm has to turn the ship so that it lines up with the location. Helm has to get close to objects in order for Tactical to scan them. And Helm, Engineering, and Tactics share the system intrusion function allowing them to hack and deactivate the abilities of enemy ships.

This can lead to several tense moments as you scrape by to complete objectives. There’s a surprising amount of strategy to each mission. Do you reduce your signature to sneak past enemy ships or do you launch a torpedo at them while they’re not aware of you? Do you drop your shields to save passengers before a star explodes or do you blast enemy ships attacking you first? You’ll also have to work in tandem with the monitor displaying the outside of the ship as well as the controls, especially if you’re working the Helm and have to weave through asteroids while steering on the console. Every mistake could be costly so you have to be on your toes. But so long as everyone does their job properly, you’ll get through.

Thankfully the interface is surprisingly smooth despite all the commands you’ll have to go through. Everything is clearly labeled and no function feels extraneous. There’s also a robust, interactive tutorial to tell you everything you need to know.

You’ll be playing on the U.S.S. Aegis by default, but true Trekkies will love playing on the U.S.S. Enterprise. Not only is it a great recreation of the original set from 1966, but it also offers a much harder challenge. It’s got stronger armor and can more efficiently allocate power but it’s not as user-firendly as the Aegis, with you having to switch monitors and maps instead of having everything at once as well as having to control everything with buttons instead of detailed diagrams on touchscreens. It also doesn’t have the system intrusion or low signature functions. But it’s still manageable and offers a unique challenge from the Aegis. You can also turn on and off labels with a push of a button.

Single player is great for getting a feel of the game as a whole. Your AI companions are surprisingly competent and can automatically set up things like warps for you but it’s often more fun to take over and do tasks yourself, especially if you feel you can do a better job at them.

Multiplayer is where this game truly shines. Players have assigned roles but if there are only two of three players then you can switch between different roles while the AI controls the others. It’s wonderful to directly communicate with people via voice chat and seeing each other coordinate tasks successfully is a beautiful and rewarding sight to behold. Of course, your mileage may vary since so much of the multiplayer hinges on clear communication and everyone knowing what they’re doing.

Thankfully, Star Trek Bridge Crew not only supports local multiplayer but also online. You can get people together through matchmaking or with private matches with friends. There’s also cross play between different headsets. That means you don’t have to lug around four headsets together in the same room, thought that does sound like the way to play as you can directly communicate with other people.

While the graphics overall are fairly basic, the ships are recreated in loving detail. Little things like the interior of the ship catching fire as the ship is attacked to NPCs interacting with each other and you makes the world of Star Trek come to life.

One big problem I have is that there isn’t a whole lot of content to chew through. There’s only six missions in the campaign each lasting about a half hour and the only ship available in the campaign is the Aegis. There is a mode offering different missions with random elements where you can play in either the Aegis or the Enterprise, but the mission types are limited too. It doesn’t help that you’ll be doing much of the same things throughout each mission, which can threaten to make matches predictable. There’s also a few dull moments to get through such as slowly cruising through space just scanning objects.

Another problem is the controls. Using the PlayStation Move controllers is accurate and stable for the most part, but they can occasionally get out of sync. It once was so out of sync that I had to exit the game and go into the PS4’s settings in order to fix it. It may be more of a problem with the system than the software, but it doesn’t help that buttons on the ships’ consoles are small and require somewhat specific positions for your hands to be in to activate them. There is an option to use regular controllers for more precision.

The magic of piloting a Federation starship in Star Trek Bridge Crew with your own hands can’t be tarnished even with all its flaws. Working and communicating together in the face of peril is so in line with the spirit of Star Trek and that’s even before we get into all the visual authenticity. It’s definitely the most fun I’ve had with a licensed game in a long time. Even if you’ve grown cynical of virtual reality, I recommend you set aside your cynicism and boldly go where you’ve never gone before. 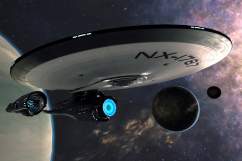