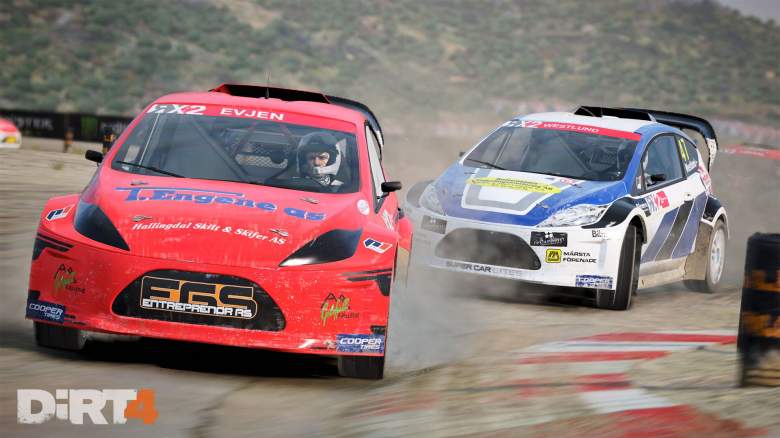 For those new to racing games like DiRT 4, you might be confused at the inclusion of an additional stretch of track that’s added onto each Rally course. This is known as the Joker Lap and while it might seem out of place, knowing how to master this mechanic will be crucial to winning races. When you start up a Rally Cross and pick your championship, players will be shown an overview of the racetrack they will compete on. Make a mental note of the small green addition that seems to be haphazardly added to the overall course as this is the Joker Lap.

However, you won’t need to worry about memorizing its location since it’s clearly marked by green barricades on the racetrack. You will only need to take the Joker Lap once per race and you’ll know it’s finished by the little jester icon turning green at the top right of your current standings. If you do not take this lap you will be penalized pretty heavily which can easily cost you an entire race.

Taking the Joker Lap can make or break a race depending on how you maximize your time on the course. Some Joker Laps act as shortcuts that cut completely through the racetrack while others will extend your length before finishing the lap. If you manage to take the lead early on consider taking the Joker Lap if it extends the length of the track. While this will put you behind everyone it ensures you don’t have to worry about it later on. Plus, if the other racers don’t take the Joker Lap right away then you will be able to pass them during it.

For shortcut based Joker Laps you can either make the most of them early on or wait for a more opportune time. While it’s tempting to take this side route during the first lap to gain the upper hand, you’ll have to remember that your opponents will have the same opportunity later on. You also, if you are feeling mean, can force opponents into the Joker Lap with a bit of force. This will obviously damage both cars involved, but can help you pass them if you’re in a deadlock with the other driver.

Joker Laps are tricky to master in DiRT 4, so make sure to observe every track beforehand and go in with a gameplan. If you are having an issue during the race, consider either lowering the difficulty or spending some time practicing with the car you have to drive.