Update: Check out the newly released videos below to watch extended gameplay of Dragon Ball FighterZ.

The gaming and anime gods have smiled upon us all on this grateful day.

For years, fans of the Dragon Ball saga have been provided with all types of games that allowed them to act out epic confrontations between their favorite characters. The Budokai series started things off on a good foot, then the Tenkaichi games made gradual improvements over time. Lately, Bandai Namco’s been having plenty of success with its MMO/fighting game hybrid franchise known as Dragon Ball Xenoverse. Thanks to an unexpected press release leak, a dream project that Dragon Ball fans have asked for will finally become a reality. During Microsoft’s E3 2017 press conference, they very first piece of footage from Dragon Ball FighterZ was shown off. And to the surprise of no one, it looked incredible in action.

Arc System Works, the masterful development team behind the Guilty Gear Xrd games, will be the ones handling the production of this new Dragon Ball fighter. Producer Tomoko Hiroki and his talented team of developers have given this fighter a 2.5D-style that’s reminiscent of the anime visuals seen in the latest Guilty Gear entries. This means you can expect to witness beautiful onscreen models of franchise legends battling it out on a 2D plane.

Dragon Ball FighterZ will bring the hype with 3v3 battles, recognizable stages to fight on and a bunch of franchise favorites, such as:

Hopefully some Dragon Ball GT and Super characters also make the game’s final roster. Omega Shenron, Black Goku and Beerus as DLC characters sounds like a strong possibility. Dragon Ball FighterZ has been announced for an Early 2018 release period. It’s set to launch on the Xbox One, PS4 and PC. You can check out the game’s official logo and two extra screenshots down below: 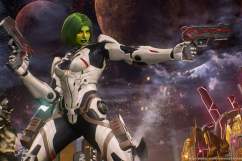