Microsoft unveiling its newest console, codenamed Project Scorpio, but now known as Xbox One X today, and with it came the launch date and price. Microsoft will launch the new console at $499 and you can pre-order at this link, when it is available.

The Scorpio is being hailed as the most powerful console ever. Here are all the features it boasts, including the first console to include liquid cooling:

The console will also come with 12 GB of GDDR5 RAM, easily besting the next available console on the market in the PS4 Pro. Nine of 12 GBs of RAM are available for game. All Xbox One games will work natively with your Xbox One X but will feature increased visuals and faster load times. The Xbox One X is not only the most powerful Xbox ever, but it is also the smallest Xbox ever. It’s not too much to expect that your third-party titles will look and run the best on the Xbox One X. We know first-party titles will be improved with the Xbox One X so why not third-party?

The console showcased a number of titles running on the new hardware, including Assassin’s Creed and a new Metro game so it might be reasonable to expect more developers to take advantage of the powerful hardware.

To celebrate the reveal of Xbox One X, Microsoft is offering a $50 discount on select Xbox One S consoles. The sale begins today and will run through June 17. 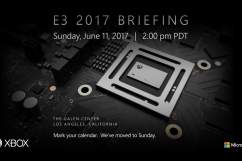