A (probably fake) petition on Change.org is calling for the cancellation of Far Cry 5 unless Ubisoft changes the game’s controversial villains.

This isn’t the only response to the controversy surrounding Far Cry 5. Here’s everything you need to know:

1. The Controversy Stems From the Religious Cult Villains

The controversy began with the reveal of Far Cry 5’s key art, depicting the game’s villains arranged in a scene reminiscent of Leonardo Da Vinci’s Last Supper. Far Cry 5 has the player fighting against the Project at Eden’s Gate, a radical religious cult slowly taking over the county through manipulation and force. In the announcement trailer, the leader Father Joseph talks about how the end is near and that he will lead his followers to the gate for they are his children and he is their father. In the vignette for character Pastor Jerome Jeffries, he talks about how his people felt abandoned and weary but they didn’t listen. But the Project at Eden’s Gate did listen and led them astray.

The key art alone was enough to stir up controversy, with many accusing the game of being a violent revenge fantasy against the average American.

I have to wonder how many people are in militant doomsday cults if Far Cry 5 is hitting a nerve so much. Be safe, America!

We're curious to see if Far Cry 5 engages critically with the white supremacy inherent in militia movements or just uses it for set dressing pic.twitter.com/TL66nt7l1u

2. The Game Is Inspired By the Mortgage Crisis As Well As Cults

Cults have existed in the United States for decades, but that’s not the only inspiration for Far Cry 5’s villains.

In a presentation of the game, Executive Producer and Creative Director Dan Hay talked about how Developer Ubisoft Montreal desired to create a Far Cry sequel in the US as far back as Far Cry 3 in 2012. He also said that the game’s villains and themes were inspired by the disenfranchisement felt during the mortgage crisis of the late 2000s.

People in the United States began looking at the government and asking, ‘Where are you guys? How are you protecting our legacy? Who’s got their hands on the wheel?’

The growing “us versus them” mentality of Americans also lead Hay to stories such as the 2016 occupation of the Malheur National Wildlife Refuge, in which an armed militia known as the Armed Patriots took over the refuge for 41 days. They knew they had their tone when they looked at stories like that. “This makes sense,” Hay thought when he saw the story unfold on the news.

The cult’s subordinates were inspired by cult roles researched by Ubisoft’s “cult expert.” John the Youngest is what Hay described as a common cult figure who is a lawyer who knows how to buy and devalue the wide swaths of land needed to build a giant compound. Faith the Half-sister keeps the cult “rowing in the same direction,” as she attracts and pacifies new followers.

“We wanted to build a cult that was putting an incredible amount of pressure on the world,” Hay said during an interview with Ars Technica. “We’re calling it ‘the reaping.’ They’re taking people-physically taking them – and the world reacts to that.”

3. There’s a (Probably Fake) Petition Calling for the Cancellation of the Game

A recently released petition is calling for the game’s cancellation unless Ubisoft changes the game’s villains.

Enough is enough UbiSoft. We’ve sat through your multicultural lectures and your preachy games aimed at degenerates and miscegenators. We’ve tolerated it in the name of gameplay design and innovation. But no more! Far Cry 5 is an insult to your fanbase, the Americans who make up the majority of your customers, and it’s time you woke up to that fact. Change this, or cancel it.

Us Gamers have had to endure a lot of crap over the last few years. The targeted harassment by the mainstream press through Gamergate, the terrible launch and outright lies of highly anticpated video games, the outright censorship of art through “localization” policies, the continued rejection of romantic partners when they find out our hobby, the appropriation of our culture by so-called “gamers” on twitter. NO MORE!

It’s time to draw a line in the sand. We, the American gamers that make up the majority of your userbase, demand to you cancel this game, or alter it to be less offensive to your main player base. In these times, you must understand that there might be some violent repurcussions if you intend to follow through with your pointless criticism [sic].

The petition goes on to outline suggestions for altering the game, such as changing the villains to something that reflects the rise of Islam in America, mixing the races of the cult members, portraying the villains as misguided patriots forced into making their own nation, and changing the setting to Canada so as to not offend the American market.

Bookmarking this beauty for when I get told I'm being "too sensitive & too offended" by Muslim antagonists in games https://t.co/oaoC79c9WG

I legit can't tell if this person is trolling or serious lol https://t.co/rNzysmnBij

People keep asking if that Far Cry 5 petition is a joke or not. Let me help you all out. pic.twitter.com/X0d2fmKoc6

Ubisoft shortly after released the expanded key art, which includes a black member of the cult – one of the changes requested in the petition.

The petition has since been updated acknowledging the black member of the cult and mocking “the mainstream games media and idiots on the internet.” He then lamented the challenges gamers face and how the media targets them.

Do these people have any idea how many controllers have been smashed, systems over heated, disks and carts destroyed 8n frustration? All to latter be referred to as bragging rights?

Gamers are competative, hard core, by nature. We love a challange. The worst thing you did in all of this was to challange us. You’re not special, you’re not original, you’re not the first; this is just another boss fight.

At the time of writing, the petition has 1,752 signatures.

4. This isn’t the First Time a Far Cry Game Has Been Controversial

Many Far Cry 3 players found that the game’s protagonist was portrayed as a “white messiah” saving the natives of an exotic location. People also were put off by the fact that you also had to kill hundreds of natives as well as the depictions of sex in the game. Game Author Jeffrey Yohalem explained to John Walker of Rock Paper Shotgun that he wrote the game to subvert the expectations and convenient ironing over of loopholes of a shooter where you kill hundreds of people.

This game is about entertainment, and about how far will you go in these loops, and how much entertainment are you actually having from them. Are you willing to kill these characters in the game in order to finish your entertainment.

In response to the themes of race in the game, he said that protagonist Jason is actually being used by everyone on the island for their ulterior motives. “Jason is basically a gun that is upgraded by the natives on the island,” he said.

When the box art for Far Cry 4 was released, in which a fair-skinned man had his hand patronizingly placed on the head of a native to a Himalayan nation, people accused the art of promoting racism. Ubisoft later clarified that the person on the box was the game’s villain – not the player character – and was also non-white.

5. This Isn’t the First Time Ubisoft Has Tackled Religion in its Games

This isn’t the first time Ubisoft has examined religion in their games. The Assassin’s Creed games have become controversial for how they portray religion. Watch Dogs 2 featured the Church of the New Dawn as a parody of the Church of Scientology. One Twitter user points out that the cross symbol for the Project at Eden’s Gate is similar to the Scientology cross.

It seems symbols on the flag and church are Tom Cruise crosses made a bit shorter. Certainly not a nazi iron cross variation. 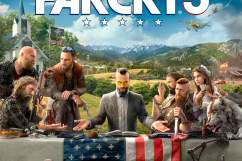