Ronaldo will be the cover athlete for FIFA 18, and the game will be released on September 29. EA Sports will be announcing more details about the game at EA Play, and you can keep it here for all the updates.

The focus of EA Play for FIFA centered on The Journey mode with the fictitious Alex Hunter. Men in Blazers made an appearance as you can see in the above video at about the 20 minute mark. Here’s a look at the new trailer for FIFA 18 The Journey:

.@MrAlexHunter returns in The Journey. Rumour has it he's on the move… #FIFA18 pic.twitter.com/LVADdtDvkb

There has not been a lot of details released, but fans can expect Ultimate Team mode to be expanded with more iconic players. Fans will have the option of purchasing the more expansive Ronaldo edition. This allows fans to play the game three days earlier on September 26 with up to 40 FIFA Ultimate Team Jumbo Premium Gold Packs.

Like Madden 18, the game will also continue using the Frostbite engine, and fans can expect even better visuals. It’s also no surprise there would be a focus on goal scoring. Here’s how EA describes new goal features:

“Score incredible goals in FIFA 18 as new movement and finishing animations unlock more fluid striking and heading of the ball. All-new crossing controls bring greater options to how you send it into the box. Whipped to the spot, arching deliveries, and pinged crosses to the back-stick will shake up your attacks in the final third,” EA Sports notes.

The latest version will also feature unique running styles based on the player. The same applies for how different players dribble the ball. The designers want to give fans a unique playing experience based on who they are controlling.

Here’s a look at the new details, and clips EA Sports revealed at EA Play:

Feel and move like top players on the pitch in #FIFA18! See more -> https://t.co/MVXdfqj4kM pic.twitter.com/0HfmJD7Sbd 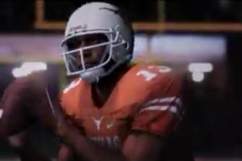 ‘Madden 18’: What Is Longshot Story Mode?