So you want to summon heroes from the “Battling Camus” summoning focus so you can take on the Grand Hero Battle with Camus, eh? Well you may want to think about that. While these heroes may be effective against Camus, they may not be that effective overall.

The young variant of Tiki is one of the most balanced units in the game with a higher base stat total than most other heroes. She is able to tank hits both physical and magical without sacrificing attack or speed, which is only elevated with skills like Armored Blow. However, her speed leaves a lot to be desired, making her vulnerable to follow-up attacks. She’s also susceptible to any weapon that does extra damage to dragons. Her Flametongue+ weapon isn’t nearly as useful as Nowi’s or Adult Tiki’s Lightning Breath+, which can counter attacks from any distance. She’s still an effective unit, but she faces a lot of competition from Nowi who has higher attack and HP as well as access to Rally Defense and Threaten Resistance.

To use Tiki to her fullest, you can have her inherit Fury to boost all her stats at the cost of taking damage every turn or Triangle Adept so she takes less damage from green units and deals more damage in return. Also swap out Flametounge+ with Lightining Breath+ and give her Bonfire to boost her damage with her impressive defense. To make her even bulkier, add Renewal to heal every two turns, Swordbreaker to giver her an easier time with Falchion users like Lucina who can decimate dragons, or Quick Riposte so she can automatically make a follow-up attack if attacked at 70 percent HP or above. Then swap out Breath of Life with Hone Attack or Threaten Resistance.

Tiki would appreciate a high speed IV and low HP IV. Here’s an IV calculator so you can see what IVs your units have.

Olwen is a blue mage cavalry unit who can move one extra space than infantry units. Unlike her counterpart Reinhardt, she has great speed which, combined with her Dire Thunder tome, can allow her to attack four times even with the speed penalty. She also has higher resistance than Reinhardt. However, while Reinhardt can’t quad attack as often, he’s able to actually kill opponents with his high attack. Olwen, with her low natural attack, needs proper investment and support with teammates with Goad/Hone Cavalry to be a threat. Also her defense and HP are subpar and her default skills aren’t that useful. However, this all changes when you have her inherit Blarblade+ from a five star Odin. Blarblade+ grants extra damage if Olwen is buffed, which stacks with the buffs themselves. Add to that her huge speed for follow-ups and you get a monstrous if fragile attacker.

Keep Reposition as that’s a useful support skill and have her inherit Luna. Then giver her Fury for higher stats as well as Desperation so she can attack and follow-up before the opponent counterattacks. Also giver her Ward Cavalry to support fellow cavalry members boosting her with Goad/Hone Cavalry.

Olwen would a high IV in speed and can live with a low IV in HP.

Jaffar is pretty decent, with high speed and surprisingly high HP for a dagger user. He also gets Deathly Dagger, which not only lowers the defenses of enemy units but also inflicts seven points of damage which stacks with Poison Strike. He also gets a powerful skill in Glimmer and access to Life and Death, the perfect skill for a glass cannon unit. Oh, and Threaten Speed is useful as well, giving him more opportunities to double attack opponents. However, his speed – while good – could be higher and his stats aren’t distributed evenly enough for him to make a significant impact. Kagero, on the other hand, not only has a better distribution of stats but does bonus damage against infantry units along with inflicting the debuff, meaning that she doesn’t need Poison strike for extra damage.

Jaffar would benefit from Draw Back as well as switching from Glimmer to Draconic Aura. Also give him Windsweep from Alm so he can prevent bow and dagger users from counterattacking.

Get a Jaffar with high IVs in speed and low IVs in HP.

One look at Fae and you may think that she’s worthless. Not only is she susceptible to weapons that do damage to dragons, but the most popular weapon of that kind, Falchion, is wielded by red units that do even more damage to her. But you’d be wrong, for she’s one of the best checks for the strongest mages in the game. Reinhardt, Linde, Nino, and more struggle against her high HP and resistance, and the red mages that could stand a chance against her are not that common. She also has good defense for taking hits against lance users as well as some axe users and great support capabilities with Threaten Attack and Light Breath. Add to that a decent attack stat, Renewal to make her even bulkier, as well as Draw Back to pull units out of a jam, and you have a surprisingly effective unit. Just don’t get her near speedy red units and anything that can kill dragons, and don’t expect to outspeed a lot of units yourself.

Give her Glacies or Iceberg to boost attack with her great resistance then add Fury to boost her stats. If you want to invest more in her, then add Lightning Breath+, Reciprocal Aid to heal teammates at the cost of your own HP, and Hone Attack to support your teammates even more. And if you really hate mages, then give her Blue or Green Tomebreaker.

Try to get a Fae with high IVs in attack or resistance and low IVs in either defense or HP.

Young Tiki and Jaffar are good units, but they are units out there that do their jobs much better. Nowi is a stronger dragon unit and Kagero is a better dagger user. Olwen and Fae are fantastic at what they do but even they come with caveats. Olwen requires the expensive Blarblade+ to work as well as teammates with Goad/Hone Cavalry and Fae is somewhat niche in her functionality. You can try summoning for Olwen and Fae, but you might what to save your orbs for a summoning focus with better heroes. If you do summon, however, be sure to do so with mostly blue and green orbs. 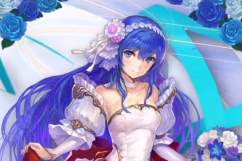