The voice actors of Overwatch reenacted the dance emotes of their voice actors to celebrate the game’s anniversary.

Anjali Bhimani, voice of Symmetra in Overwatch, posted the video on her YouTube channel sweeetanj. The video is essentially an extended version of a video posted on Twitter by Zenyatta’s voice actor, Feodor Chin.

Everyone did a great job, but I personally think the East Coast ladies killed it.

This isn’t the only video of the Overwatch voice actors goofing around. Back in November of 2016, Lucio voice actor Johnny Cruz filmed himself going around Blizzcon interacting with the other voice actors of Overwatch.

The Overwatch Anniversary event wraps up June 12 with players earning double XP for the remainder of the event. The Anniversary event loot boxes are also available for the rest of the event, allowing you to nab cool legendary skins as well as the dance emotes performed by the Overwatch cast. The event also adds new modes for the arcade, the 3v3 Lockout Elimination mode where heroes are taken away as they are used to win matches and the 1v1 Limited Duel forcing players to choose one of three random heroes each round.

Season five of Competitive mode also started on May 31. An end date hasn’t been announced but Director Jeff Kaplan said that a timer may be added in the future to inform people when it’s ending. Kaplan is also planning a policy that bans players from Competitive mode permanently if they are banned repeatedly. Kaplan is also planning changes for the Mystery Heroes mode such as removing the “Assemble Heroes” wait time and get rid of people killing themselves to switch to a new hero.

Exciting things are coming to Overwatch, giving us even more reasons to dance for joy. 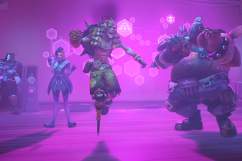