Pokemon Sun and Moon are getting upgraded rereleases in the form of Pokemon Ultra Sun and Ultra Moon releasing on November 17, 2017 for the Nintendo 3DS. While the recent Pokemon Direct didn’t give us a whole lot of information, we do know that it will have an alternate storyline, new Pokemon to catch, and new features. The direct didn’t go into any more detail than that, so we can only speculate on what kinds of new features they’ll be. We also know that they’re not coming to the Switch, but I don’t mind since I would rather just have a brand new game built for the system from the ground up.

I’m hoping that the games improve upon what I consider to be the strongest entries in the series. Here are five improvements I want to see in Pokemon Ultra Sun and Ultra Moon.

Since the very beginning, Pokemon has dumped a bunch of unskippable tutorials about how to catch and battle Pokemon onto the player. They’ve been getting progressively longer and more obnoxious as the games went on. Pokemon Sun and Moon is the tipping point of this problem, forcing you to go through a trainer school when they were previously optional. I already have to go to school in the real world, I don’t want to do it in the virtual one!

This is of course a problem for veteran players who have been doing this since 1996, but it’s also a pain for anyone who is replaying the games and has to sit through the tutorials again. That’s why you should either shorten the tutorials, weave them into the gameplay, or at least make then skippable.

I see how this is useful for training or getting Pokemon with certain stats, but there were so many times where I had a Pokemon on the ropes ready for capture only for it to call in reinforcements to delay and annoy me. That’s why you should allow the player to catch any Pokemon even with multiple out there. You can also put a cooldown for calling Pokemon so they don’t just spam it over and over, and prevent them from attacking if they use it. Seeing a Pokemon calling for help shouldn’t be boring.

Instead of beating eight gyms, Sun and Moon has you completing Island Trials. Trials consist of some sort of quest or puzzle that needs to be solved before the big boss Totem Pokemon shows up. Totem Pokemon are buffed versions of regular Pokemon that can call for allies. Instead of just beating a string of trainers or solving a complicated puzzle, the trials have their puzzles revolve around a self-contained narrative.

While the trials are fun, with the ghost-type trial containing awesome, kid-friendly horror elements, I think they could have made the puzzles a bit more challenging to solve. Some trails aren’t even trying. The fire-type trial is like one of those “spot the difference” pictures but for idiots. It really made me miss the sprawling puzzles that made the gyms of past games so memorable, and I would love to see some of that return for Ultra Sun and Ultra Moon. Just don’t make them too cryptic like in the older games (I’m looking at you, Team Rocket HQ).

Each Pokemon entry significantly bumps up the audiovisual quality, but the animations have become so pompous as the games have gone on. Do I really need to sit through an cutscene every single time I heal Pokemon, fly to a location, and more? You can turn off some battle animations, but you can’t turn off all of those smaller cutscenes. It may not seem like much, but they can add up and really bog down the pacing of the adventure. Some of these things should take no more than a simple transition at this point.

5. Let Me Catch a Wobbuffet

Pokemon has a loooooooooong list of unobtainable pokemon. These Pokemon can only be in your party if you transfer them through Pokemon Bank, which costs money to use. It’s already been confirmed that new Pokemon are coming, but I want to see even more awesome Pokemon return without the need of external services.

I chiefly want Wobbuffet because they’re awesome. They have huge HP, are round and squishy, have a goofy face, their tail may be the actual Pokemon which is cool, and they say “WAAAABAFETT” all the time. Sure they’re not competitively viable, but who cares when you have a WAAAABAFETT!

I like to shout WAAAABAFETT when walking around my house. It scares the neighbors.

While were at it, how about you add a feature where you can change the Kanto Pokemon from their Alolan forms to their Kanto forms and vice versa? Like, what if I don’t want an Eggxecutor that always hits itself when walking through doorways? What if I want the nice, stubby version from Kanto?

Also, you have a Rotom in your Pokedex but no Rotom to catch yourself? Shameful. 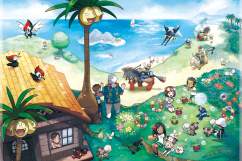 ‘Pokemon Sun and Moon’: Why They’re the Best ‘Pokemon’ Games