New DLC for Prison Architect is coming exclusively to PS4 on June 6 and Xbox One on June 9.

The Psych Ward DLC, which follows up from the free Prison Architect Community Update, adds Criminally Insane inmates. According to a press release from Introversion Software, Criminally Insane prisoners are a new security class with new and varied reputations and traits. Psychopathic Inmates are Criminally Insane inmates who have five or more traits and are branded Psychopathic. You can also hire Psychologists to hold one-on-one sessions with inmates to balance their moods and attend to their needs as well as add padded cells to gradually improve inmates’ desires for Privacy, Comfort, Safety, and Freedom as well as feelings of Suppression.

Prison Architect, released October 6, 2015 on Steam, is a prison construction and management simulator developed and published by Introversion Software. The game was funded by an immensely successful crowdfunding campaign with Introversion Software’s own crowdfunding platform, earning $270,000 in the first two weeks and selling 8,000 copies. The game has over two million players worldwide to date. The PC version has a Metacritic average score of 83 with reviewers praising the game’s accessibility and depth. The PS4 version has a score of 80 and the Xbox One version has a score of 74. It’s also available for the iPhone, iPad, and Xbox 360.

Introversion Software is a UK-based, independent developer founded in 2001 by three university students. They’re behind other critically acclaimed video games including Uplink, DEFCON, Darwinia, and Multiwinia. They have previously been voted one of the top 50 Best Games Companies in the world. 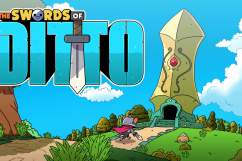 ‘The Swords of Ditto’: 5 Fast Facts You Need to Know