The lineup boasts many classics that are widely considered to be some of the best games of all time, such as Super Metroid, EarthBound, Super Mario World and many others. The game even features Star Fox 2, which has never been released anywhere in the world. The game is a sequel to the original Star Fox, which is included with this bundle, and was developed but never saw a release for whatever reason.

The console will come with an HDMI cord, one USB charging cable with AC adapter and two wired Super NES Classic Controllers. The Super NES Classic Edition features many multiplayer titles such as Super Mario Kart and Street Fighter II, so an additional controller will come in handy.

Unfortunately, we aren’t getting the full Donkey Kong Country trilogy but instead only get treated with the first game in the series. To make up for it, we get arguably some of the best platformers of all time with Super Mario World and and Super Mario World 2: Yoshi’s Island. 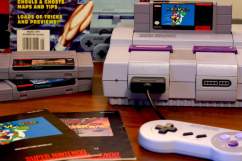 Read More
Nintendo
Here's the list of games coming with the new console.