Wolfenstein II: The New Colossus was announced at Bethesda’s E3 2017 conference and is slated for release on October 27, 2017 for Xbox One, PS4, and PC.

Sequel to Wolfenstein: The New Order and Wolfenstein: The Old Blood and developed by MachineGames, The New Colossus has B.J. Blazkowicz blasting Nazis in a Nazi-controlled version of 1960’s America as part of a new resistance. As you travel to Roswell, New Mexico, New Orleans, Manhattan, and more, you’ll amass a collection of weapons and abilities and use them to fight soldiers, cyborgs, robot dogs and more in a variety of playstyles.

The game was first teased in June of 2016 during Bethesda’s E3 Conference of that year. As they were beginning to reveal Quake Champions, they showed a “boot-up sequence” that listed “New_Colossus” under “New_Order” and “Old_Blood.”

The game was also leaked on Amazon, revealing not only that the game was coming but that there will be a collector’s edition.

According to IGN, “New Colossus” is the name of a poem by Emma Lazarus, which was referenced by B.J. at the end of The New Order. The poem was written in 1883 to raise funds for the Statue of Liberty and was inscribed to a plaque on the inner wall of the statue’s pedestal in 1903.

The New Order was released on May 19, 2014 to critical success, earning an average score of 81 for the PC version, a 79 for the PS4 version, and a 79 for the Xbox One version. The game was also on PS3 and Xbox 360. It was also a commercial success with over 3.53 million in sales across all versions of the game according to VGChartz. The game saw a stand-alone expansion pack in the form of The Old Blood, which served as a prequel to the game.

The first game in the Wolfenstein series, Castle Wolfenstein, was developed by Muse Software in 1981. According to YouTube Channel DidYouKnowGaming?, Id Software Designer and Programmer John Romero convinced the team to adapt the game with their 3D technology. They began working on the game before they even asked for permission from the original license holder. They found out the publisher of Castle Wolfenstein went bankrupt, and so purchased the trademark at a low cost. They officially rebooted the series as Wolfenstein 3D in 1992, and is considered by many to help popularize the first-person shooter genre. Subsequent entries in the series would go on with different developers, with Gray Matter Interactive developing Return to Castle Wolfenstein in 2001 and Raven Software developing Wolfenstein in 2009.

Bethesda revealed many other games during its E3 press conference this year, including VR versions of Doom (2016) and Fallout 4 as well as The Evil Within 2. Bethesda also announced the Creation Club, where they work with external partners and creators to create new content for Skyrim and Fallout 4. 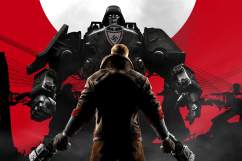