‌Telltale Games announced three new seasons for their titles today. One of them was a second season of the popular Batman series. The new season will feature five episodes like its predecessor and will again allow players to play as both Batman and Bruce Wayne.

Telltale took an interesting take on the Batman mythos to leave players guessing. It would have been easy for players to not trust characters like The Joker or the Penguin, but this game left those character’s intentions unclear.

Returning with the second season will be Telltale’s Crowd Play feature. This feature allows multiplayer of sorts for the game as it will allow friends and family with mobile devices to make the choices so it’s like they are part of the action too.

The game will also have voice actors returning from the first season such as Troy Baker as Batman/Bruce Wayne and Anthony Ingruber as John Doe/The Joker.

Here is the description of this season, as laid out by Telltale:

In this latest chapter, both Bruce Wayne and Batman will be forced into precarious new roles. The Riddler has returned to terrorize Gotham City, but his gruesome puzzles merely foreshadow an even greater crisis. With the arrival of a ruthless federal agent and the return of a still nascent Joker, Batman must navigate uneasy alliances while Bruce Wayne undertakes a perilous series of deceptions. Which of Batman’s new allies will you choose to trust? And how deep into the darkness will you let Bruce descend?

It sounds like the Riddler will take over as the main antagonist with this season, but The Joker will also play a prominent role.

The first episode will be available on Xbox One, PlayStation 4, PC, Mac, iOS and Android devices August 8. You will also be able to pick up a physical version on console on what’s called the Season Pass Disc. This disc will include the first episode, The Enigma, and then allow you to download the remaining episodes as they are released.

You can watch Telltale’s summer update below where The Wolf Among Us and The Walking Dead also had new seasons announced. 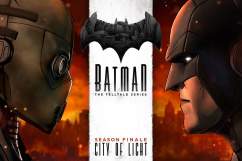