A brief trailer showed some footage of the story-driven expansion set to release later this year. After speculation that you may control Zelda, it has been confirmed that you will still be in control of Link for this DLC.

Mr Aonuma confirmed you'll still play as Link in The Champions' Ballad, but learn more about #Zelda along the way pic.twitter.com/DvRbvQuOeb

The first DLC, The Master Trials, released last week and brought tons of minor additions, mostly quality of life changes, while the new DLC will bring out the added story fans have been waiting for. That’s not all though, as the lobster shirt seen at the beginning of The Wind Waker will be making its debut into the game as well.

Apparently there was an audience for this shirt so fans of it will be pleased to see it make its way to Breath of the Wild. Nintendo has added just about every outfit you could think of into the game but now they’ve surprised us with the Lobster Tunic, so anything is up for grabs at this point. We don’t know what stats, if any, the shirt will have in the game.

The second DLC takes place after the end of Breath of the Wild. That leaves a wide open direction for where the DLC could go, especially after considering how the game ended.

The Champion’s Ballad is set to debut towards the end of this year. The DLC is not available as a standalone purchase but you instead have to purchase the Season Pass for $20. It is set to be the last DLC released for Breath of the Wild, unless Nintendo has another trick of its sleeve. The DLC will be available for both the Wii U and Nintendo Switch versions of the game.

To go with the release of the final DLC, Nintendo unveiled a new line of Breath of the Wild amiibo that will allow players to have the four champions from the game in amiibo form. We don’t yet know what function they will have in the game but we will let you know as soon as we find out. 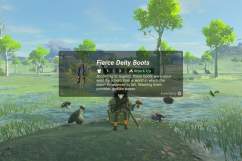 The Legend of Zelda: Breath of the Wild: How to Get The Fierce Deity Armor

Read More
Nintendo Switch, The Legend of Zelda: Breath of the Wild, Wii U
The iconic Lobster shirt returns. It's iconic, right?