Absence makes the heart grow fonder. Ask any longtime gamer about Crash Bandicoot who experienced the great run of 3D platformers back in the day. That quote will reflect their true feelings. Crash’s legacy may have started out in a positive light, but his recent run of appearances have been connected to mediocre games. For years, fans have made it clear that they want to go back to the good ol’ days and relive Crash’s first three adventures in remastered form. In 2017, that dream scenario has finally blossomed into the Crash Bandicoot N. Sane Trilogy. Visually and mechanically, all three Crash games have been properly revived and are a reminder of the tougher days of platformers featuring anthropomorphic heroes.

As soon as you boot up this collection, you’ll immediately pick up on how much stronger the visuals are. Sony’s favorite orange marsupial has gotten a much-needed makeover that smoothes out every part of his former polygonal design. Crash’s hilarious facial/movement animations are even more expressive, plus his fur actually reacts to the elements on each stage. All three games’ collection of varied stages look all the more better – the wild forest’s look that much livelier, the water flows more naturally, the inner tombs appear even more dangerous and the futuristic environments maintain an even better sheen. The original soundtrack has audibly been spruced up, plus the sound effects hit all the right nostalgic notes since they remain the same. Those familiar xylophone notes and that Aku Aku pickup notification have never sounded better.

It’s clear that Vicarious Visions chose to allow this collection’s gameplay to remain as faithful as possible to how they were before. That’s kind of a blessing to some and a curse to others. Crash and Coco are nimble characters who can hop, spin, crouch, ride other animals/vehicles, wield a rocket launcher etc. Both characters are only capable of jumping and using their tornado spin on enemies in the first game though, which makes it the simplest entry in this remastered compilation. That’s to be expected since that game birthed the series in the first place. The first Crash Bandicoot maintains its high difficulty level, which is something that’s sure to drive old and new gamers up the wall. Prepare to get infuriated as you miss a platform for the umpteenth time due to a errant leap. In a way, the first game’s tough stage layouts are truly a test of one’s platforming skills. The challenge is definitely there for those who can handle it. But experiencing the first Crash Bandicoot for the very first time may prove too demanding for some.

Cortez Strikes Back and Warped are pretty tough experiences as well, but they’re at least more manageable thanks to the improved movesets of Crash and Coco. Pulling off bigger leaps comes naturally thanks to the slide maneuver and picking off enemies from a distance becomes a viable option. Getting chased by rampaging boulders/animals, riding a warthog/baby polar bear/tiger and tackling the bonus stages helps each game maintain its commendable element of variety. Warped features everything the first two games feature and throws in a nice dosage of vehicle-based stages and more creative boss encounters. Props goes out to Vicarious Visions for throwing a nice coat of paint onto a series of games that still holds up during this current generation.

The Crash Bandicoot N. Sane Trilogy proves that Crash’s original trilogy is just as admirable as it was back in the day. It’s gotten the HD remaster facelift that it deserves, plus the audio is just as humorous and memorable as its original incarnation. The stages themselves look amazing and the gameplay itself is still mechanically strong in the areas of tight platforming and varied boss fights. The first game in the series is sure to enrage you and force you to question your skills as a gamer due to its high difficulty. Don’t let that deter you, though. All three titles offer up some of the best platforming experiences in 2017 that people celebrated back in the mid to late 90’s. This collection is a shining example of how to revive a beloved gaming icon. 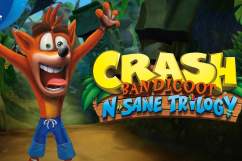