Fire Emblem Heroes received a news update in the form of the Feh Channel on YouTube. Think of it as a miniature Nintendo Direct for Fire Emblem Heroes, hosted by an adorable owl named Feh. In the video, they announced new heroes, modes, and more in preparation for the game’s six month anniversary.

The Nohrian Summer heroes were announced, with Xander, Female Corrin, Leo, and Elise getting swimsuits as well as new weapons and skills. They’re coming in a summer summoning focus on July 28 at 12 a.m. PT (3 a.m. ET), which will run until August 30 at 11:59 p.m. PT. A new Paralogue story is also coming with maps were you fight against the Nohrian summer heroes. You can learn more about them here.

A new voting gauntlet was also announced and will pit the Nohrian Summer heroes against the Ylissean Summer heroes. The gauntlet is coming August 1 at 12 a.m. PT (3 a.m. ET).

Fire Emblem Heroes will be celebrating its six month anniversary with bonuses and special events starting August 2. Special events include a log-in bonus that offers extra orbs if logging in for 10 consecutive days. The bonus periods run from August 7 to 22 and August 22 to September 11, giving you a total of 40 Orbs. There will also be quests and special maps but they weren’t specified in the news update. All we know is that there will be Daily Training Tower and Extra Sacred Seals quests as well as Turn Limit Special Maps and Daily Special Maps.

A new summoning focus will also be available during the six month anniversary celebration known as Starter Support: Hero Fest, which offers a summon rate of 5 percent and begins August 10. The heroes offered won’t be revealed until then. There will also be a log in bonus for the focus giving you an extra 20 orbs.

Your first summon will be free starting with the summoning events on August 7.

YouTubeSpecial events include a log-in bonus that offers extra orbs if logging in for 10 consecutive days.

Version 1.6 will bring a new arena mode called Arena Assault, which will put you into a series of maps against other player’s teams. Not only that, but you have to use a new team for each map. Special items can be used to restore HP, deal damage to enemies, enable the use of special skills for all allies, and more. You can take up to three items per game. Stamina and duel swords are not required. Each season’s rewards will be based on rank. Sacred coins can be earned in the mode, but their function was not revealed. The new mode is coming August 8.

Version 1.6 will also include the catalog of heroes, which will show all the heroes you acquired and allow you to hear their voice lines and see their artwork and battle animations.

In addition to all that, Version 1.6 will also increase max hero merit limits from 2,000 to 3,000, make improvements to the Training Tower, and boost EXP and SP earned in the Arena.

A new Grand Hero Battle was announced with Valter: Dark Moonstone. Valter is a flying unit with the Cursed Lance, which has a might of 16 and grants two extra points in attack and speed and reduces the cooldown for special skills by one at the cost of taking four damage per battle. He also has Darting Blow which boosts speed by six if initiating attack and Panic Ploy which turns buffs into penalties for all enemies with three HP or lower more than Valter in the cardinal directions from him. He also has the special skill of Luna, which ignores 50 percent of the foe’s defense and has a cooldown of three. He can be yours if you beat his map. His battle is coming late August.

The third Tempest Trials event was announced with heroes from Fire Emblem Echoes: Shadows of Valentia. Bonus allies involve heroes from the game and one of the rewards is a new hero. New features include continuous auto to have units fight for you across multiple maps until you either win or lose all your units. Team Management will allow you to create up to 10 reserve teams for multi-map battles. There are also new normal difficulty battles with foes starting at level 10. A new score bonus will grant you triple the points every day for the first two times you head into battle. Bonus allies will also get a 10 point boost to HP, a 4 point boost to all stats, and earn double EXP and SP.

Above is the recap of all the special events coming to Fire Emblem Heroes, taken from the YouTube video. 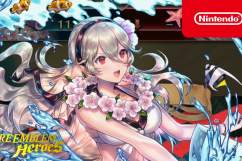