Fresh off the controversy of the banning of players, another wound was opened in the community when Friday the 13th: The Game developer Illfonic announced it was working on a new project called Dead Alliance.

After lots of chatter about the game being abandoned, the developers not caring, etc., Illfonic released a statement saying it has not abandoned the game but the team for it is actually growing. Here is the statement that was posted on Reddit:

I wanted to address the concerns that IllFonic has abandoned Friday the 13th: The Game for Dead Alliance. This is 100% not true. Most major and independent studios have multiple teams working on multiple projects at the same time. This is critical for the survival of the studio, especially with the ups and downs with the game industry. Dead Alliance was started way before Friday the 13th: The Game. It was a co-development by Psyop Games and IllFonic then titled Moving Hazard. Psyop Games released Moving Hazard to Steam Early Access well over a year ago and it gained interest from Maximum Games for a console port. We’ve had a team who remained working on what turned into Dead Alliance for consoles that has always been separate from the Friday the 13th: The Game team. IllFonic still remains a small studio to this day but we are growing.

Xbox One players have been waiting for a patch to fix their game for quite some time now and the developers still say they are working on it. Players across all platforms are still waiting on more news about a single-player mode as well. It has almost been a month since the last update and the game still has plenty of bugs to fix.

Hopefully with the growing team, these bugs will get ironed out sooner or later. At the very least, we know the team is still there and working on the issues. 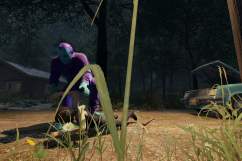 Friday the 13th: The Game: Helping Jason Can Result in a Ban