There’s clear evidence of that statement if you’ve been following the scene and its tournament finals presentation at Evo 2017. After BlazBlue: Central Fiction’s main stage showcase met its climactic conclusion, representatives from Arc System works arrived with two exclusives. One of those brand new pieces of info pertained to future character DLC for BlazBlue: Central Fiction – Jubei, one of the Six-Heroes, will finally become a playable member of the roster! His gameplay proves that his mastery over a blade is unparalleled. Jubei will officially be added to BlazBlue: Central Fiction’s ever growing roster later this summer. It looks like his home forest base will be coming to the game as a new stage, too.

Take a peek at his gameplay reveal video below and read up on his history from Giant Bomb as well:

Jubei is an incredibly strong, if short, cat person. He became one of the famed Six Heroes who defeated the Black Beast during the war of magic, and might have had an impact during the Ikaruga civil war. Hakumen considers him to be the strongest person in the world, and in one part of the story he actually stopped Iron Tager’s fist with his bare hands (paws?). He seems to be on friendly terms with his descendants in the Kaka clan, as Taokaka unironically refers to him as “cat person.”

In BlazBlue, Jubei plays a small (though important) role in the story, but is not a playable character in the game. He is revealed to be the father of Kokonoe, conceived with his partner Nine another member of the Six Heroes, the genetic father of the Kaka clan and the sensei who taught Ragna how to wield a sword. Apparently, he also carries a Nox Nyctores called “Musashi,” rumored to be the “greatest katana in the world.”

Now onto the other piece of Arc System Works fighting game news. A crossover fighter featuring characters from BlazBlue, Persona 4 Arena and Under Night In-Birth Exe:Late[st] was announced – BlazBlue Cross Tag Battle. It features 2v2 battles, tag-in mechanics and the universal art design seen in all three games. The gameplay trailer posted below shows off the first four characters featured in this upcoming release – Ragna the Bloodedge, Yu Narukami, Hyde Kido and Ruby Rose, a special addition from RWBY.

BlazBlue Cross Tag Battle will be released in 2018. 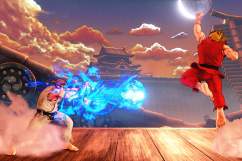 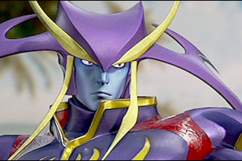