We received some more information about Kingdom Hearts 3 yesterday and some of it actually became some big news. We got a look at another trailer showing off some more gameplay, but more importantly it showed Sora and friends traveling to a new Toy Story-themed world.

More importantly, the game finally received a release window of 2018. That’s not saying it won’t be delayed once we hit 2018, but at least we know Square Enix is targeting next year for the game. Kingdom Hearts 3 will mark the first time any game in the series has appeared on a Microsoft console. Although the series has appeared on Nintendo platforms in the past, the game is not currently coming to the Nintendo Switch. This doesn’t mean you should lose all hope of it coming though.

According to IGN, Kingdom Hearts 3 director Tetsuya Nomura says a Nintendo Switch version of the game could be in the cards well down the road.

“The Nintendo Switch is definitely a very interesting piece of hardware, but if we lightly say, ‘Oh yeah, we’ll be on the Nintendo Switch,’ I’m sure people will come back and say, ‘But what about the PS4 and Xbox One? We want them out first. Don’t focus on other platforms,’” Nomura told IGN. “So for now, we want to focus on what platforms we’ve already announced we’re going to be releasing Kingdom Hearts 3 on. And so after, perhaps, maybe we can start thinking about other possibilities.”

This should give Nintendo Switch fans some hope but it’s likely that shortcuts will have to be taken in order to get the game running at a decent level on Nintendo’s newest hardware. Square Enix has already shown support for the Switch with releases of Dragon Quest Heroes 1 and 2, I Am Setsuna already on the console with Lost Sphere, Project Octopath Traveler and Dragon Quest XI coming down the road. This lineup already bests the weak showing of Square Enix on the Wii U.

However, all of this is just talk at this point and we don’t have anything definitive as of yet. For now, you can look forward to Kingdom Hearts 3 and a more adult-looking Sora coming to the PS4 and Xbox One in 2018, hopefully. 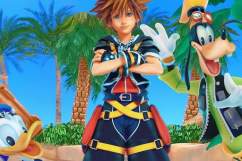