In big Overwatch news today, Activision Blizzard has announced the sale of the first Overwatch League teams to seven cities and owners today. This is being done in an effort to further grow the Overwatch brand and to further build momentum for esports as a whole.

The cities that were chosen already represent well populated sports cities and now they will add an official esport to the list of sports. You’ve probably heard of the teams too, if you’ve been following esports at all in the last few years. Here are the list of teams and the cities they are going to, along with their owners.

Activision Blizzard CEO Bobby Kotick explains that Overwatch reaches a very large audience already, and this will give fans more of an opportunity to engage with one another. For example, fans in the Boston area will now have an actual hometown team to root for, which now gives the potential for city rivalries between teams to be born.

“Overwatch already connects over 30 million players worldwide. The Overwatch League will celebrate and reward our most accomplished players and give fans more opportunities to engage with each other,” said Kotick in a press release. “We’re excited to be working with leaders from esports and traditional sports to celebrate our players and to establish the Overwatch League.”

Blizzard CEO Mike Morhaime says the league is established for both esports fans and traditional sports fans. It’s being done in an effort to mesh the two different sports and reach an even wider audience. According to Newzoo, 285 million people worldwide watched esports in 2016, and that number is only growing.

The league will create value for team owners through advertising, ticketing and broadcast rights revenues, with teams receiving an equal share of all league-wide net revenues. Teams will also keep all local revenues generated through their home territory and venue up to a set amount each year.

New England Patriots owner Robert Kraft says there hasn’t been a better time to jump in on esports and that he has been looking for the right entry point for years.

“We have been exploring the esports market for a number of years and have been waiting for the right opportunity to enter,” said Kraft in a press release “The incredible global success of Overwatch since its launch, coupled with the League’s meticulous focus on a structure and strategy that clearly represents the future of esports made this the obvious entry point for the Kraft Group.”

There’s no news yet on what TV stations the game will be broadcast from. We assume it will make it’s way to TV instead of being exclusively online in order to reach an even broader audience.

In other Overwatch news, Doomfist was officially announced and unveiled last week. After much teasing, the character has joined the PTR and will be available in the official game some time in the near future. In the meantime, you can check out our guide on how to play as him right here. 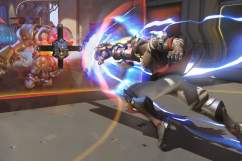 Overwatch: How to Counter Doomfist and Which Heroes to Use