Specials, also known as Special Weapons, are super-powered weapons in Splatoon 2 that can turn the tide of battle if deployed smartly. Once you maximize the special gauge by spreading enough ink on the map, you can push in the right control stick to activate your special.

Here’s how to use each special to its fullest as well as how to counter them.

Tenta Missiles fire four homing missiles at each opponent targeted. Once you activate the special, tag opponents in the circle that appears and then press the ZR button to launch the missiles.

Make sure that there are multiple enemies in the vicinity so that you can attack all of them. However, doing so will extend the firing animation and leave you vulnerable for longer. Activating the special will also reveal the location of opponents to you. So even if you miss, you’ll have an idea of where opponents are.

Markers appear to show where the missiles land, so get out of the way if you’re caught in the crossfire.

Tenta Missiles can be found on the Slosher and the Splat Dualies.

Splashdown launches you into the air upon activation before slamming back down to the ground, creating a big explosion of ink.

The higher from the ground you are when you activate the special, the bigger your explosion. You can also activate the special while super jumping, meaning that opponents waiting for you to land will get a nasty surprise. While you’re not invulnerable to attacks while the special is active, the sudden launch into the air can evade some fire and catch opponents off guard.

The special is best for close opponents, so stay away from users who have the special.

Splashdown can be found on the Blaster, Splat Roller, and Splattershot weapons.

Fans of the Bubbler from the original game will love Ink Armor. The special negates all damage from a single attack. Unlike the Bubbler, however, Ink Armor is applied to all teammates at once without needing to touch them while activated.

Ink Armor is only good for one shot so save it for enemy specials or charger shots.

There’s a bit of a delay when you activate Ink Armor, so you can shoot and defeat opponents before the effect is even applied.

Ink Armor is found on the Splattershot Jr.

The Sting Ray is immensely powerful, but turning while firing is slow and is delayed by 0.7 seconds according to the Splatoon wiki. However, you can move and strafe normally while firing. You can also stop firing and then move the camera freely. This special is perfect for sniping distracted opponents from cover.

There’s an indicator that appears before the beam fires, so move out of the way to avoid getting hit.

The Sting Ray can be found on the Dynamo Roller, Heavy Splatling, Splat Charger, and Splatterscope.

The Inkjet propels your Inkling into the air with a Super Mario Sunshine-esque ink jetpack. From there, you shoot blaster-like projectiles that explode. When the special is finished, the player super jumps to the location where they activated the special.

You can not only splat opponents with your projectiles, but with the two beams under your inkling. Keep moving as you’re vulnerable to chargers in the air.

A marker appears in the spot a Inkjet user super jumps to, so take the opportunity to set up an ambush. But be wary that the user may have the Drop Roller ability, which allows the player to roll in the direction they tilt the left control stick after landing from a super jump.

The Inkjet can be found on the Splash-o-matic, the Octobrush, and the Tentatek Splattershot.

The Bomb Launcher is similar to the Bomb Rush special from the original game but allows players to throw multiple bombs farther and with greater accuracy. The type of bombs launched are also not dependent on the player’s sub weapon.

Be sure to let loose the weapon when there are multiple people in the same area for maximum chaos.

Stay in cover or swim up walls to avoid the onslaught.

The Ink Storm summons a rain cloud drizzling ink above the area the grenade was thrown. The cloud gradually drifts from its location.

Send this out above choke points or objectives on the map. Shoot ink at opponents to speed up their demise and prevent them from escaping. Have a teammate toss Toxic Mist in the area to slow down opponents and soak them easier.

Get underneath platforms when you see the cloud coming. Also spray the ground underneath a cloud in your teams’ colored ink to help teammates escape if they’re caught.

The Ink Storm can be found on the Splattershot Pro.

The Baller places your Inkling in a hamster ball, making them move faster and take less damage while inking the ground as they move and walking up walls. If you hold down the ZR button while the special is activated, the Baller explodes.

Think of the Baller as Junkrat’s Tire in Overwatch. Quickly sneak up on opponents over walls and then detonate when you get near them.

The Baller shield isn’t immune to damage, so fire away and break it before the enemy gets a chance to explode.

The Bubble Blower is more of a distraction than anything else. They cover the area quite a bit in ink, but their main function is to draw the enemy’s attention away from the objective. It’s also good as a makeshift barrier to block enemy shots. If the enemy tries to shoot down the bubbles, shoot them down while they’re distracted.

Don’t bother with trying to shoot down the enemy team’s bubbles. It takes way too much time – time that’s better spent focusing on the objective. They can splat you if they explode so keep your distance. If you have a long range weapon, you can try sniping the enemy from a distance. They’ll often try to pop their own bubbles so you can hit them while they’re distracted. 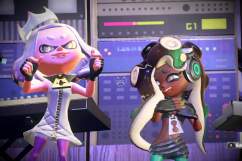 Splatoon 2 Splatfest Demo Impressions: How Is the Game?