As you may have noticed, this month’s Daily Log In reward is Chief Chirpa. That’s not just a coincidence, as an upcoming update is set to introduce three brand new Ewok characters to the already large roster of characters.

Wicket, Logray and Paploo are the new additions and July will also be bringing more Ewok-exclusive events to the game. We will have special Ewok Marquee events, Double Drops and more to celebrate the three new characters. You may have noticed the Ewoks currently in the game have received new art.

Here are all the events going on this month:

You can check out all the other events coming soon in the Road Ahead blog post. Most notably, we have a new iteration of Luke Skywalker coming, called Commander Luke Skywalker.

If you want to take advantage of the Double Drops coming, here are all the nodes with Ewoks currently on them.

If you’re looking to take the easy route and unlock the Ewoks quickly, you can purchase bundles featuring Ewok shards right now for $20 a pop.

We also have a full list of changes made to the current Ewok roster, as laid out on the Galaxy of Heroes forum.

Special 2: Power of the Forest 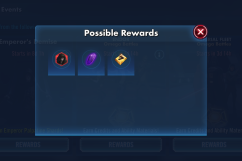