Pure, zany chaos is perhaps the best way to describe developer Volition’s newest action/adventure game Agents of Mayhem. While not a direct sequel to the famed Saints Row game series, its influence is felt far and wide in this 40+ hour game. Despite this, Agents of Mayhem manages to both feel familiar and wholly unique in its gameplay, which allows it to stand out among other single player titles released this year. Even with its faults, Volition has managed to deliver a fun experience that offers some of the most creative moment to moment gameplay in recent memory.

Set in a near-future Seoul, South Korea, players work for an organization known Mayhem that is dedicated to stopping any evil forces in the world. Run by a colorful cast of former villains, anti-heroes, narcissists, and do-gooders, Mayhem seeks to stop an evil, world spanning faction dubbed Legion. While the story itself is fairly straight forward, where Agents of Mayhem shines is in the colorful cast of supporting characters and villains you come into contact with. Legion is made up of various figureheads that all need to have their influence removed before you can take down their leader Dr. Babylon. These can range from a love struck artificial intelligence to a self-obsessed pop figure that feels like the worst parts of every celebrity rolled into one package.

This works thanks to the fantastic voice work and witty dialogue that constantly hurls jokes and sarcastic comments at the player. Not all of it hits the mark, but there are enough amusing lines to elicit a few chuckles or the occasional eye roll. Most of this is presented in slick animated cutscenes that showcase either major events or act as intros for the 12 different playable agents you can unlock.  The actual in-game visuals are a bit underwhelming as many of textures feel muddied or bland. There is a nice sense of color, but Agents of Mayhem certainly won’t “wow” anyone when it comes to visuals.

Where this game shines is in the gameplay, as the various agents all provide unique mechanics that help you tailor the action to your liking. Users start out with three playable agents and are able to grow this number out by completing both main and side missions. Every character features unique dialogue, missions, and an opening cutscene that lends much-needed context to their past.  Uncovering who they are and what their own personal mission is can prove to be highly entertaining to the point where it overshadows some of the main story arcs. However, you are limited to only having three agents out in the field at any time, so it’s up to the player to choose who they want to play with.

Every agent has a special gun, unique skill, and a powerful ultimate move called a Mayhem Ability. These characters can be further customized by either pouring skill points into one of four specialties or by adding additional passives via Gadgets or Upgrade Cores. This can turn your mundane killer into a true instrument of death that can wipe out an entire room without taking a hit. The customization isn’t as deep as an RPG, but it offers enough to allow players to tailor an agent to their liking.

Understanding how your team of three works and synergizes together will become vital as you progress not only through the 57 story missions, but the staggering 15 difficulty settings.  Every Agent has their own pros and cons, so it’s up to the player to deduce how to best assemble their team. Some heroes like Oni can inflict powerful status effects on foes, allowing more damage focused heroes like Kingpin to easily finish them off. Enhancing this are various one shot gadgets that can completely swing a fight in your favor.

Players will face off against a multitude of enemies ranging from long range snipers that can completely disable an agent to advanced Engineers that buff their comrades. Learning their weakness and how to handle them is crucial since Agents of Mayhem typically likes to throw hordes of them at the player. Sadly, the A.I. isn’t exactly smart and usually will only rush the player firing like madmen. This makes them exceptionally predictable and exploitable with certain ranged characters like Rama or Hollywood.

You’ll be fighting Legion forces all across the city of Seoul which, while well designed, lacks enough variation to really make certain areas stand out. With the exception of most boss related areas, Seoul offers nothing truly special or memorable that will stick with you after the credits role. Yet, the worst offenders are the Legion bases which are just a collection of drab and boring rooms stitched together. They are completely indistinguishable from each other and the main story seems compelled to constantly force you into these locations.

When it comes to actually moving in this world players can either use the traversal abilities that each agent possesses or by driving one of the many cars you can summon with the touch of a button. Though players will want to opt for the former due to Agents of Mayhem having some of the worst handling cars I’ve ever seen. The driving mechanics feel like a complete afterthought as car combat boils down to ramming each other until one explodes. It’s boring and lacks any sense of control that other open world games have been able to implement. There is also a small multiplayer component that centers around people banding together to complete daily activities like killing 1,000 Legion soldiers. It’s a nice way to earn additional experience and cash, but ultimately this section is fairly forgettable when compared to the rest of the game.

Make no mistake, however, Agents of Mayhem is an exceptionally fun game and is one that shouldn’t be dismissed. There is a lot of fun to be had, especially when it comes to experimenting with the dozen Agents under your control. Despite its bland level design, poor vehicle controls, and mixed visuals, Agents of Mayhem is a blast to play. The unique Agent swapping mechanic allows a lot of experimentation and the ability to further customize heroes makes the gameplay incredibly rewarding. Agents of Mayhem may not win any Game of the Year awards, but it’s still a solid game that any Saints Row fan will enjoy. 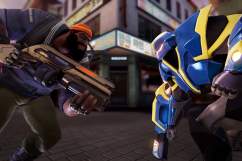 Agents of Mayhem: Top 5 Best Agents You Should Use