Although ARMS has already held a Global Testpunch event and has already released Nintendo has decided to for another round with the ARMS Global Testpunch. With the previous Testpunch, players were only able to play in one hour spurts but things are a bit different this time around.

Players still have to download the free ARMS Global Testpunch software from the eShop but instead of waiting around to play, you’ll have the full weekend of uninterrupted action. Starting on Friday, August 25, at 11 p.m. ET players will have the opportunity to jump into ARMS and play with other players and try out a variety of characters. Like we mentioned earlier, instead of having just an hour of play each time, this event runs all the way through August 27 and ends at 5 p.m. ET that day.

ARMS has also detailed its next free update which will introduce a new character, stage and three new Arms. The new character is the street-performing pugilist known as Lola Pop. She is described as a well-traveled clown with a personality as colorful as her clothing. Her key ability is inflating her body like a balloon which makes a her a great defensive fighter.

If you participated in the initial Global Testpunches and deleted the software you might run into some trouble finding the software to download again. You can redownload the software by visiting the Account Information page in the Nintendo eShop on your Switch.

Like the other Testpunch events, ARMS will allow players to go head-to-head with other players or opt for a few rounds in Hoops and Skillshot.

Since its release in June, ARMS has recently cracked the one million copies sold mark and it looks like Nintendo is trying to keep that ball rolling with this Testpunch. One of the key selling points of the game is the fact that it receives free updates and DLC, much in the same vein of Splatoon 2. 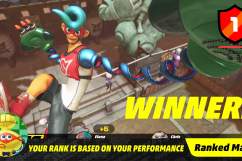 ‘ARMS’: Top 10 Tips and Tricks You Need to Know