Zapdos will only be around a little longer, through August 14, so trainers are trying to beat Zapdos in raids and catch as many Legendaries as they can before the Pokemon is gone. Of course, Niantic may very well bring back Zapdos at some point, but we have no idea when. So if you’re out there trying to beat Zapdos in raids, you’re likely wondering what’s the smallest number of trainers that you can gather together in order to be successful.

Well, it looks like the lowest number so far is just three trainers. Joshua Webb shared this exciting news with us:

Watch the video above to see how they did it. The three trainers who took down Zapdos together are Marcus Cain, Zaccary Waterman, and Terry Stevens. Webb told Heavy that Terry is retired and at level 40, playing every day. Impressive!

Redditor ADD_ikt developed a spreadsheet for the best Pokemon (at Level 30 or higher) that you should have in order to defeat Zapdos with the fewest number of players. You can see the whole thing here. Here are the details on the top three Pokemon to defeat Zapdos.

If you use Tyranitar with Bite + Stone Edge, you’ll need about “3.66 trainers” to beat Zapdos, going up to 6.37 if the trainers don’t rejoin.

And if you use Dragonite with Dragon Breath + Dragon Claw, you’ll need about “3.62 trainers” to beat Zapdos, going up to 7.24 if the trainers don’t rejoin.

However, he noted, at the end of the day you’ll likely need 38+ Level Pokemon to have the best shot at defeating Zapdos with only three trainers. Meanwhile, four Level 30 players should be able to defeat Zapdos with Golem, Tyranitar, Dragonite, and Piloswine (or, of course, just Golem.)

How many trainers have you used to defeat Zapdos? Let us know in the comments below. 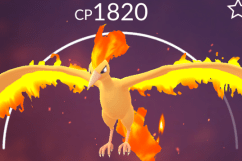 How Many Trainers Do you Need to Beat Moltres in ‘Pokemon Go’?