Despite not being much of a gamer, Kaci “Kaci” Aitchison has been a constant presence at The International for the last four years. Each year, she returns to the Dota 2 community as the event’s designated host and interviewer, proving that the barrier between esports and the rest of the world is only as strong as we allow it to be.

1. Her Only Role in Esports is Interviewing at The International

Kaci is something of an oddity in esports, never having actually played Dota 2. When Valve began hosting auditions for The International 2013’s host, which was the only position that did not require Dota 2 knowledge, she was only made aware of it when her agent contacted her. She breezed through the audition with flying colors but, understandably, the Dota 2 community was apprehensive of an outsider acting as a host for their world championship. However, despite the community’s suspicions, Valve hired her as TI3’s host and interviewer.

In an interview with Red Bull Esports, Dota 2 developer Erik Johnson explained what made Kaci such a perfect match for The International.

“With someone who conducts interviews really well, it’s a lot harder than most people think,” said Johnson, “And Kaci has other things – she sings in a band, she’s got an improv background, she’s really colorful and really likes meeting people, and for this event that’s a really great mix of skills, and the main thing, and this is true of all of Valve, is she wanted to do it. She’s really having a good time. I’m really glad, I’ve got a huge amount of respect for what she’s doing.”

“I’m just really excited about how it’s gone, and I really hope that people who aren’t familiar with this world at least develop a respect for it,” Kaci told Red Bull Esports, “I think it’s really important that people know that this world exists and it’s filled with passionate and smart people.”

2. Outside of Esports, She Works as a Reporter

A Washington native, Kaci landed her first job in broadcasting in radio when she was a sophomore attending the University of Washington. For 10 years, she worked as a traffic reporter, promoter, overnight host, and news anchor for KBKS-FM. She also worked with The Bob Rivers Show on KZOK-FM when she was still in college, where she was briefly a News Director.

Later, Kaci then moved on to on-camera broadcast work. Since joining the Q13Fox network in 2009, a Fox affiliate owned by Tribune, she has since taken on the roles of co-anchor and feature reporter.

According to a Reddit AMA she hosted after The International 2013, she was also a cast member of Jet City Improv for seven years, where she met her husband.

3. Morgan Freeman Once Fell Asleep During Her Interview

When Now You See Me’s popularity was at its peak in 2013, Kaci and her co-anchor on Q13 FOX News This Morning were granted an interview with Morgan Freeman and Michael Caine. While Caine was explaining the appeal of the tricks used in Now You See Me, Freeman was seen falling asleep in his chair.

In an interview with PEOPLE, Freeman jokingly explained that he wasn’t sleeping, but was beta testing a nonexistent Google product.

“I wasn’t actually sleeping,” he claimed, “I’m a beta tester for Google Eyelids. I was merely updating my Facebook page.”

4. She Was Once Nominated for a Northwest Regional Emmy

In 2014, Kaci was nominated for a Northwest Regional Emmy Award for Special Event Coverage. The nomination was for her special “The Road to We day” as the official reporter, alongside Senior Producer Ashley Van Sant and Video Editor Darlene Tsao. Their special covered Seattle’s local youth involvement in WE Day, the annual celebration of the WE Movement to encourage and empower youths to make change.

While it’s no secret that Kaci has a passion for rapping, which she has integrated into her news broadcasts in the past, the reporter is also a talented singer.

In an interview with Dota Blast’s Andra Ciubotaru, Kaci revealed that she discovered her love for singing on stage when she performed Lady Marmalade during karaoke. She eventually pursued her hobby of singing with a coworker from the radio station she used to work at, who had formed a classic rock cover band with some local musicians.

“I told them I wanted to sing and they didn’t believe I could, so I recorded myself doing karaoke of Lady Marmalade (after some tequila, I might add),” she told Dota Blast, “And they let me join!”

While she no longer jamming out on stage as a part of Spike the Impalers, her love for music has not died. 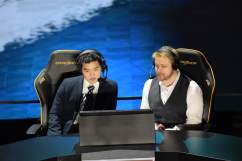