Based on all we have heard about Madden 18, fans expect the latest edition of the NFL franchise to be the best one yet. Thanks to the kind folks at EA Sports, I have been able to spend some time playing the upcoming game.

While I will release a more detailed review of the game, I wanted to give fans a sneak preview on what you can expect to see when you get your hands on Madden 18. Fans who purchase the G.O.A.T. edition will have access to the game on August 22, while the general release date is August 25.

The LongShot Story Mode is going to be worth the price of the game itself, which we will detail next week. From a gameplay perspective, it feels similar to Madden 17, but visually the game takes a step forward with the Frostbite engine overhaul.

Here are my initial thoughts after playing Madden 18.

The first game I played was a rematch of Super Bowl LI between the Falcons and Patriots. Don’t worry Atlanta fans, I avenged the 28-3 debacle. While I noticed greater detail in the players and uniforms, visually the game did not look like it had undergone a massive overhaul.

However, I noticed quite a bit of a difference when I played a normal afternoon game, rather than the Super Bowl rematch inside a dome. The lighting makes the field and game play look much more realistic. The way the field is shaded makes you feel like you are watching your favorite team on a Sunday afternoon. The default camera angle gives a closer feel to the field adding to the realism.

As has been the usual for sports games, the crowd and sidelines are the last things to get upgraded. You may be disappointed if you were expecting Frostbite to help provide enhancements to either the fans or how the sidelines appear. There are also still moments during replays when you notice a player’s foot does not appear to be touching the grass.

These are small things that may be on the to do list for next year. The main thing fans will notice is the players and uniforms continue to look more realistic.

Most of the New Features Focus on LongShot & Ultimate Team

In my time playing the game, I did not notice a big difference in this year’s game play when compared to the 2017 edition. My hunch is the majority of EA Sports time and energy went into the LongShot mode. The remaining manpower was likely spent on Ultimate Team upgrades.

There will likely be nuanced tweaks that become apparent the more you play the game. Nothing jumps out at you after initially playing Madden 18.

Users will get three options of play styles: arcade, simulation and competitive. The majority of my time was spent using the simulation mode as I suspect will be the case for most non-competitive gamers.

One small thing I noticed was the ability to gain a lot of yardage on quarterback runs. While this is a lot of fun if you are on offense, I imagine if it had been one of my friends playing against me instead of the computer there would have been a lot of cursing as Matt Ryan ran all over the defense. My sense is this would get curtailed a bit by upping the difficulty, but it is something to watch when you get the game.

Yes, This Could Be the Best NFL Game Ever

With the addictive nature of both Ultimate Team and LongShot, there is a good chance Madden 18 will be the best NFL game we have seen. These modes combined with the visual improvements to the overall game should leave fans who purchase Madden 18 satisfied. Continue checking back to Heavy for more in-depth analysis of Madden 18 including a detailed look at the LongShot Story Mode. Feel free to leave any questions in the comments section, or reach out to me on Twitter @JonDAdams. 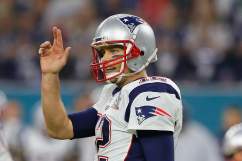