Are the bosses in Mario + Rabbids Kingdom Battle getting you down? Well read on for the strategies you need to beat all of them.

Pirabbid Plant will launch rocket-like shots that have a chance to burn you, causing you to run around and out of cover. So be sure that you’re not surrounded by the other enemies. Take high ground as much as possible so that you do extra damage to the Pirabbid Plant. Also try to lure it next to the fire boxes in the arena. If it’s near one, position your character so that it has a zero percent chance to hit the Pirabbid Plant. Then make the attack and you’ll blow up the fire box.

Rabbid Kong will be at the far end of the arena. It will release shockwaves that will bounce teammates back. Be careful that you’re not at the edge of the arena when the shockwave releases because you’ll go out of bounds and take extra damage. You’ll be immune to the bounce back effect if you’re behind full cover. You can also use Rabbid Luigi’s Super Barrier ability to become immune to the bounce back effect.

Every time you attack Rabbid Kong, it heals itself with its pile of bananas. To prevent this, all you have to do is get a character to the pressure plate in front of Rabbid Kong to release the bananas. Be sure to take advantage of abilities that increase your mobility such as Luigi’s Double Jump or Itchy Feet. Then exhaust Rabbid Kong’s 120 HP with attacks. Be careful as anyone standing on Rabbid Kong’s pressure plate during its turn will take 50 damage.

Be sure to take out the regular enemies before heading to Rabbid Kong as they can be quite a distraction. However, you can ignore the Smashers because their low mobility means that they cannot reach you easily and Rabbid Kong can push them back with shockwaves.

After defeating Rabbid Kong once, you’ll have to repeat the process of standing on pressure plates to deplete its banana reserves two more times.

Focus your attacks on the ice one as his “Hero Sight” ability is devastating and can quickly deplete the HP of heroes who like to move around the battlefield. It also has less HP than the tornado one so it’ll go down quicker so you can focus on the tornado one. The tornado one loves using bombs to blow up cover so use the indestructable cover near the middle of the stage. And when he puts up his barrier, make sure you have someone shoot it down so you can take it down and use a super move or something.

The Icicle Golem will have a large shield that will block all attacks, similar to the Bucklers. So take it out the same way. You have to flank its sides and then attack. The boss shoots ice balls that can freeze your teammates, which prevents them from using special skills. However, they only do 30 damage so you shouldn’t have to worry too much about them. Get up close with Princess Peach so she can blast the boss with her cannon.

After depleting its health bar once, the Icicle Golem will drop its shield and start moving around the arena. The boss adds a damaging melee attack to its repritror, so keep your distance and keep attacking. Princess Peach’s Royal Gaze is useful for taking out the boss as it moves.

After depleting its health yet again, the Icicle Golem will jump to the very end of the arena. It will not only shoot you but use a Villain Gaze to attack you if you try moving around. Smashers and Supporters will start spawning. Take out the Supporters first as they can heal other enemies. Ignore the Smashers until they get close. Also be sure to keep away from the Freeze Boxes or you’ll take extra damage if the Icicle Golem shoots at you when you’re near them. Just get in close with Princess Peach and Rabbid Mario and wail on the boss with their cannons.

After depleting the health one more time, the boss’ head will pop off. Dash into the head to end the boss fight.

The third midboss is essentially the Pirabbid Plant and Buckler enemies combined. The midboss lobs grenades that do relatively small damage but can destroy your cover and leave you vulnerable to the other enemies in the arena. The boss also has an ability that repels your heroes away from it and out of cover, so keep your distance. It also has a shield that protects him from all damage against any opponent he faces, even when not in cover. Take out the smaller enemies first as they can quickly overwhelm you. Use Rabbid Mario’s Magnet dance to lure the midboss towards him so that it exposes its vulnerable sides and backside to your other teammates. Also use reactionary skills like Mario’s Hero Sight as the midboss is vulnerable when moving around the battlefield.

The operatic phantom is completely immune to damage when its spotlights are on. You have to dash into the light bulbs that are connected to the spotlights in order to shut them off and leave the boss vulnerable. Use mobility enhancing abilities like Luigi’s Double Jump and Itchy Feet to get to light bulbs quicker. Once you take out the boss’ first set of spotlights, start moving along the sides of the arena so you can reach the light bulbs for the remaining spotlights sooner and flank the boss and other enemies.

The boss shoots blasts of music that can push you away from light bulbs and do extra damage unless you’re in cover. Take out the Bucklers as soon as possible because their attacks can push you around as well.

Mecha Jr. behaves just like the smasher enemies. He moves towards anyone who attacks him so he can smash them with a cow hammer. This makes him vulnerable to reaction abilities like Mario’s Hero Sight and Luigi’s Steely Gaze. Have one hero on one side of the map and another on the other side and take turns shooting Mecha Jr. so he’s constantly going back and forth without hitting anyone.

Be careful as Mecha Jr. has Rabbid Mario’s Magnetic Dance ability which draws heroes closer to him and out of cover. He also launches sentries to chase you down but you can shoot Mecha Jr. and lure him into the sentries. Be sure to take out the Valkyries on either side of him because they can use their protection aura to reduce the damage he takes. 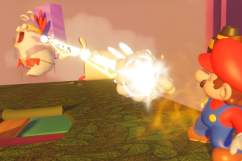