Mario + Rabbids Kingdom Battle has eight great heroes for you to choose, and each one is useful for their own reasons. Here’s how to use them to their fullest thanks to some tips from Ubisoft themselves.

No matter what team composition you have, Mario will always be your leader. That means when it comes to investing in heroes, you’ll have to make him your top priority. This isn’t a problem, however, because Mario is a well-balanced character with abilities that are useful throughout the entire game no matter who he partners up with.

Mario wields the mid-range blaster and the melee hammer, making him best for mid to close range encounters. Mario’s melee attack can not only hit opponents near him but also other opponents (as well as teammates) in the area of effect.

Hero Sight is Mario’s most useful ability, allowing him to automatically shoot any enemy that enters his line of sight. Not only does this apply to enemies that move during their turn, but enemies that are moved by Super Effects like Push, Burn, and Bounce. Mario can also shoot at enemies lured out of cover by Rabbid Mario’s Magnetic Dance and Rabbid Yoshi’s Scaredy Rabbid. Invest in this ability early in the skill tree, starting with the

M-Power boosts the damage of Mario himself as well as allies close to him. It has a long cooldown so try not to waste it. You can use it before using the powerful melee attacks to maximize damage or use it to power up someone else’s reaction ability like Luigi’s Steely Gaze.

Finally, Mario can learn the Stomp Jump, which lets him stomp on an opponent after a Super Jump and land somewhere close. It’s a great way to add up damage just like dashing does as well as get you behind enemy cover. Just make sure that you land in cover after performing the move.

Rabbid Peach is the healer character, making her essential for escort missions by healing whoever you’re escorting. She’s also a great fighter in her own right thanks to her shield ability absorbing damage significantly and her ability to dash multiple times in a row.

She also gets a sentry which can take out enemies behind cover and serve as a sort of land mine so that they don’t get too close. Sentries can also draw fire away from your other teammates, including the reaction shots of enemies. You can also use Rabbid Mario’s Magnet Dance or Rabbid Yoshi’s Scaredy Rabbit to lure enemies into the path of sentries.

Rabbid Peach’s shield ability is perfect for drawing fire from enemies. If an enemy has a reaction ability active, you can activate the shield and run into the enemy’s line of sight to make them waste their shot.

Luigi is brilliant as the game’s token sniper character. He has by far the longest reach of any character, and is pretty strong to boot. However, he also has by far the lowest HP in the game making him vulnerable to just about any attack. Be sure to protect against close range attackers with his sentry. Pair him with weapons with the Ink super effect to prevent enemies from attacking. His massive line of sight pairs wonderfully with his reaction ability of Steely Stare.

His double jump allows him to team jump with two allies, greatly increasing his mobility. Be sure to unlock Cleansing Jump so you can remove the effects of Super Effects inflicted on allies.

Itchy feet increases the distance all allies around Luigi can travel. This means that allies can more effectively flank opponents or move to objectives. The effect also applies to Luigi, giving him even more distance with his Team Jumps.

Rabbid Luigi is very effective at disrupting the abilities of opponents. His Bworb weapon has a higher chance of inflicting Super Effects than other weapons. If you give him a weapon with a Vamp Super Effect and combine that with his Vamp Dash, he’s surprisingly good at staying healthy on the battlefield. His Rocket can attack multiple opponents in an area of effect and destroy cover.

His weaken ability reduces the attack power of all enemies within range. This combined with Princess Peach’s Protection aura and Rabbid Peach’s shield makes allies almost invulnerable. It also allows allies to get in close with melee strikes as it leaves them less vulnerable.

He also gets a Super Barrier. While it only protects against a bit of damage, it makes Rabbid Luigi completely immune to Super Effects. This is perfect for taking on Bucklers who have an ability that can guarantee the activation of their Super Effects.

His Magnet Dance ability is one of his most important abilities as it draws all nearby opponents towards him. Use this to set up shots with the Boomshot or trigger the reaction abilities of Mario and co.

Combine Mario’s M-Power with Rabbid Mario’s Boom Dashes and other attacks to take down groups of enemies quickly.

The royal highness Princess Peach is fantastic both offensively and defensively. Her Boomshot combines with Rabbid Mario’s to clear out groups of enemies close by quickly. She also has a variety of abilities to protect her teammates.

The Protection aura reduces damage taken by allies at the cost of Peach taking some of that damage. Use this in conjunction with Rabbid Peach’s shield or Rabbid Luigi’s Weaken to almost completely shut down enemy attacks.

Peach heals all allies as well as herself whenever she performs a Team Jump, but only in an area around her landing spot. Learn Cleansing Jump as soon as you can to remove Super Effects as well.

Rabbid Yoshi is one of the strongest fighters in the game thanks to his Rumblebang weapon. While the damage can vary greatly, it still packs quite a punch. His Outer Shell ability can completely nullify a single attack (two if upgraded), making him also a good option for defensive plays.

Scaredy Rabbid repels all opponents near Rabbid Yoshi. This not only draws enemies out of cover but triggers reaction abilities.

Triple Dash allows him to tackle three enemies in a row, dealing damage and setting them up with an attack from his Rumblebang or Grenaduck. Use Luigi’s Itchy Feet to extend the distance Rabbid Yoshi can tackle enemies.

Yoshi is by far the strongest fighter in the game. Not only does he have the powerful Rumblebang, but he uses it for his reaction ability Egg Beater. He also has a rocket because why not.

But what really makes him stand out is Super Chance, which guarantees that Super Effects activate for weapons held by all teammates around Yoshi. This way you can bounce someone in the air with a Bounce effect, trigger the activation of a reaction ability, and then prevent the enemy from attacking by using Ink or Stone.

Yoshi also has the Ground Pound ability, which damages all enemies, cover, and allies within an area after Yoshi performs a Team Jump. Combine this with Mario’s Stomp Jump and Rabbid Mario’s Boom Dash to do significant damage without even firing a shot.

For a damaging combo, destroy enemy cover with Yoshi’s rocket, activate Yoshi’s Egg Beater, and then use Rabbid Mario’s Magnetic Dance to lure enemies closer so Yoshi can tear them apart with his Rumblebang.

Thanks to Ubisoft for all of the great tips. 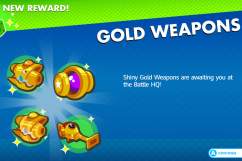 Mario + Rabbids Kingdom Battle: How to Get Gold Weapons