NBA 2K18 is coming soon but it’s not quite out yet which gives us a chance to look at ratings and have a discussion about them. We previously took a look at the ratings in 2K18 compared to 2K17 but this time we’re taking a look at the rookie ratings for this year’s game.

We no longer have the benefit of comparing scores from a college basketball video game so now we have wait until the drip feed of info is revealed through Twitter. The 2K twitter page and Ronnie 2K have been tweeting out player’s ratings for the past few weeks so this is where we’re getting our info from. As a result, the list is incomplete and we have next to nothing to show for the second rounders so we haven’t included them with this iteration. Once the game actually comes out we’ll get the list updated to include both rounds of the draft.

Below is the list with ratings we know as of right now. This list will be updated as more ratings become public.

Who do you think will have the highest @NBA2K rating of the 2017 Draft Class?@SLAMonline #FLSLAMDraftSuite pic.twitter.com/c5N7wPtjwX 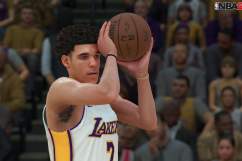