A new, but small update for Overwatch has dropped across PlayStation 4 and Xbox One that looks to fix some bugs and update the user interface. Released earlier today, this patch’s big addition is giving players the ability to view their network status while they play. This gives users the ability to view their Network Ping, Network Interpolation Delay, and  Network Round Trip Time.

Here are the full changes for the August 15 Overwatch update:

What many hoped was the addition of Deathmatch and the possible changes to heroes like Junkrat and Roadhog. These are still in the PTR (Public Test Realm), so don’t expect to see these rebalances go live for a few more week. Another big feature that is still yet to be implemented is a reporting system for console players which has been desperately needed of late. Given how incredibly toxic Overwatch’s competitive scene is growing, the lack of accountability has caused throwers, trolls, and other troublesome players to flood the servers.

Now all we have to do it sit and wait to see if Blizzard will be implementing this system sometime in the future. While the developer has acknowledged they are working on the problem, there has been no official word on when or what type of system they will be implementing. 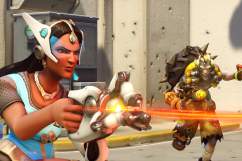