Pokemon Ultra Sun and Ultra Moon received a new trailer today showcased the new Lycanroc form and other things. The trailer is brief but it gives us a good amount of content to talk about.

For a few seconds in the trailer you can see a Pokemon following the trainer around which seems to suggest your Pokemon will follow you in this iteration. Some Pokemon games in the past have had this feature so it wouldn’t be completely unexpected if it did happen but there’s still a possibility something else was going on in the trailer.

The new Dusk Form Lycanroc was shown off in battle along with details on the way to get the new Pokemon. Luckily we know that you have to purchase either Pokemon Ultra Sun or Ultra Moon before January 10 to receive a special Rockruff that will evolve into the new Pokemon. A different way, if there is one, to get this Pokemon has not been revealed yet.

We also have a description of what path the story will go in the new games:

In Pokémon Sun and Pokémon Moon, the story centered heavily around the Legendary Pokémon Solgaleo and Lunala. In Pokémon Ultra Sun and Pokémon Ultra Moon, a new story unfolds featuring Necrozma alongside the Legendary duo. Ominous dark clouds begin to spread and the secrets of Necrozma and the Alola region, which were never disclosed in the previous games, will finally come to light.

Also coming to the new games is a new Z-Power Ring which will give players an wider variety of Z-Moves.

You can check out the new trailer below. 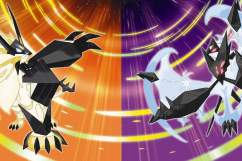