The long-running Resident Evil series has seen its share of spin-offs over the years. Whether that has been Outbreak, the two Chronicles games or the widely panned Umbrella Corps, the series has shown it is willing to take risks.

One of the risks that paid off was the Revelations series. The first one, originally released as a Nintendo 3DS exclusive, really brought the series back to its survival horror roots after the success of Resident Evil 4 changed the series. The game was successful enough to warrant a sequel that focused much more on co-op. That game was released in an episodic format and put characters into the shoes of fan-favorite characters such as Claire and Barry.

Resident Evil Revelations 1 will boast a full 1080p resolution, a smoother framerate, increased environmental detail and refined creature movement for the current-generation of consoles. We were unsure if that included the Nintendo Switch version so we’ve reached out to Capcom for comment.

Resident Evil Revelations launches August 29 both physically and digitally for Xbox One and PS4 for $19.99. The Switch version along with Revelations 2 are both looking at a late 2017 release at $19.99 each. In North America you’ll be able to find a combo featuring both games for $39.99. The pack will contain a cartridge for the first game and a download voucher for the sequel.

This news comes just a couple days after it was reported that Capcom was going to bring more games to the Nintendo Switch. The success of Street Fighter II on the console has led Capcom to think that the Switch is worthy of more titles and even called the game a “smash hit” in the company earnings report. The company even had a hand in getting the Switch to increase the amount of RAM to 4GB, so they could put the Resident Evil engine on the console.

This could possibly just be a taste of what’s to come in the future. 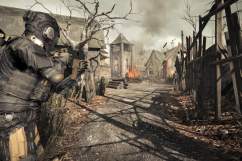