• Use Disease Ammo when thieves are clumped together to infect everyone in a close area. As for the other types of ammo available, they stick to the following categories – Poison, Freeze, Caltrops, Big Head, Dumdum and Machine Gun. Each of these ammo types are beneficial in their own ways (especially the Machine Gun variation!), so experiment with each one until you come upon your favorite.

• Use gadget supply drops at the start of rounds to make sure that thieves haven’t passed them. Aid your fellow thieves with Buddy Stamina to help keep the team moving and be sure to drop some Decoys in order to throw those snipers off your trail.

• Combine different gadgets for interesting synergies; for example, try combining the digger with the Speed Boost for speedy tunneling. Your gadgets are broken down into three categories for both classes – Ammo, Support and Trap (Snipers), then Boosts, Support and Disguise (Thieves). Use all of them during a game since as soon as you start up a new game, their total stock will be refreshed. Thieves tend to be well off with the gadget combination of the Stamina Boost, Buddy Health Head Safe items. Snipers should do well every time with the Explosive Ammo, Mines Drop and Freeze Trap gadgets.

9. Slick Taunts Will Save Your Life

• Some taunts will stop you almost instantly; use these to fake out a sniper just before they shoot at you.

10. Keep Your Eyes Peeled at All Times for Tired Thieves

• When you’re targeting a single thief, take note of how he’s moving across the map. It’s easy to pick up on how tired a thief is due to how fast they’re moving. The slower they’re running, the less gas they currently have in the tank. You should take the opportunity to eliminate a thief once he takes a breather before or after upon reaching his checkpoint. You should also take the chance to take out any other thieves that may be in the vicinity of your sole resting target (chances are they’ll be trying to recover some stamina, too). It’s also worth shooting at the hiding spot of a thief since it’ll surprise ’em and bring ’em out in the open. 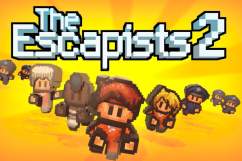