Puzzles are nothing especially new to the Destiny series, as developer Bungie is known for implementing challenging riddles or challenges for players to complete. While many of them are hidden deep within the Destiny 2 raid, one can actually be accessed right from the beginning. Focused around 6 levers, players will need to pull them in a certain numerical order. Despite having six switches you can get away with only using three people for this puzzle.

To start, make your way from the starting walkway to where the Cabal soldiers are chilling. Unless you want to fight, do not kill any of them otherwise you will make every soldier hostile. Instead of going up, turn and head down the ramp until you’re under the walkway you just ran across. You should see a door that’s open and leading to a machine room. Enter it and take note of the six different levers across the room. 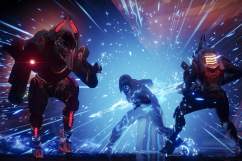 Destiny 2 Leviathan Raid: Where to Find the Irrigation Chest

In order to complete this puzzle, players must pull the switches in a specific order as quickly as possible. You will know when the levers work because they won’t jam and will go all the way down when pulled. From left to right the order for the levers is 1, 5, 3, 2, 4, 6. Once they have all been pulled you should hear some noise above you. Now run to the section that launches you up to the top and ride the lifts to the next section. Instead of going forward, look down and jump to the area where the pipes lead into the darkness.

This is the section that has opened and trust us, it’s a very big area to explore. Players will now have access to the entire underbelly of Calus’ Leviathan, which is far more intricate than one might imagine. Hidden away here are numerous secrets including chests and shortcuts to specific raid encounters like the Pleasure Gardens. Just, try to not get lost as you run through Destiny 2’s most confusing location.

Destiny 2  (PS4, Xbox One, PC)
Destiny 2 is the best new shooter in the galaxy from Bungie.
Get This Deal       $51.50
Heavy may receive a small commission from your purchase.