PlayerUnknown’s Battlegrounds has been wildly popular since its release on PC earlier this year. It has gone on to break several concurrent users records on Steam as well as even becoming the most streamed Twitch game for a while. We even have PewDiePie streaming it with regularity and sharing some choice vocabulary while doing it.

The point is, PUBG has taken the world by storm and has inspired a lot of developers out there to create their own version of the rapidly growing battle royale genre. We already have a big handful of games within the genre including H1Z1 King of the Kill and The Culling, but PUBG has largely overshadowed those games, at least on PC.

When the news hit that PUBG was coming to Xbox One, there was a lot of excitement. Not everyone has a gaming PC that can power the game, and admittedly even the best PCs in the world struggle with the game. PUBG goes for a more realistic look while designing its game which may be part of why its so taxing on your hardware.

At first glance, you might just write Fortnite off due to its cartoony looking graphics, it being an early access title and the fact that it was described as “Minecraft meets Left 4 Dead” by Epic Games itself. All of those might be fair concerns but that was before Fortnite: Battle Royale was unveiled. This new standalone game is 100-player PvP mode that will be free to everyone starting September 26.

This isn’t just a carbon copy either. Many of the features you find in the regular Fortnite such as crafting and building will make their way over to this standalone game. It would be wrong to just write this off as a PUBG clone as it is so much more.

The important thing to note is that this game will be free. It will also launch earlier than PUBG on Xbox One which will give it a huge early advantage. It is also being developed by Epic Games, of Gears of War and Unreal Tournament fame. Gears of War should be a very familiar name to Xbox owners which should make Epic Games practically a household name. Having name value in the form of a developer should help players flock to this new game. We mentioned it’s free, right? There will be microtransactions available in-game but they will remain purely cosmetic or compendium-like so there will be no pay-to-win items in the shop.

Fortnite: Battle Royale is similar to PUBG in that players spawn in by parachuting from the sky where they will then rush to find some gear to get the early edge. That’s pretty much where the similarities end. Sure, it’s a third-person shooter, but there are many things to do in Fortnite: Battle Royale that just aren’t possible in PUBG. We see in the trailer that you can shock enemies with traps, build bridges and that’s just scratching the surface. Since the crafting aspect carries over from Fortnite, the possibilities are practically limitless.

Like PUBG, players can queue into matches as a team so you don’t have to worry about betraying your friends if you don’t want to. From what we’ve seen so far, Fortnite: Battle Royale looks like it will become a true opponent to PUBG’s dominance.

Bluehole, the developer of PUBG, isn’t taking this news all that well. Bluehole thinks Fortnite: Battle Royale borrows a little too much from their game and they are considering taking further action toward Epic Games, as mentioned in a press release today.

“We’ve had an ongoing relationship with Epic Games throughout PUBG’s development as they are the creators of UE4, the engine we licensed for the game,” Bluehole’s Chang Han Kim said in the press release. “After listening to the growing feedback from our community and reviewing the gameplay for ourselves, we are concerned that Fortnite may be replicating the experience for which PUBG is known.

“We have also noticed that Epic Games references PUBG in the promotion of Fortnite to their community and in communications with the press,” Chang Han Kim continues. “This was never discussed with us and we don’t feel that it’s right.”

To the naked eye, it seems like Bluehole might be a little worried about this upcoming release. While the playerbase is already there on PC, the Xbox One playerbase hasn’t materialized yet. We still don’t even have a concrete release date for PUBG on Xbox One but we know Fortnite: Battle Royale is coming next week. This means there’s a chance that Epic Games could end up biting off a huge chunk of the potential PUBG userbase on Xbox One all because their game came out earlier.

Free games on consoles tend to perform well, especially at first. We have games like Smite and World of Tanks performing quite well on Xbox One but some games end dying a slow death. It’s entirely possible Fortnite: Battle Royale won’t catch fire but with the immense popularity of this genre and the excitement surrounding PUBG, it’s hard to imagine a world where this isn’t a hit, at least for a few weeks.

This brings us to the question: will Fortnite: Battle Royale hurt PUBG sales on Xbox One? It’s hard to say with complete certainty since the Xbox One version of PUBG isn’t out yet and we don’t really have the benefit of being able to see how it looks and performs on Xbox One. We know what we’re getting with PUBG and if it ends up being $30 on Xbox One like it is on PC, you’re getting a lot of content for half the price of a normal game. On the other hand, Fortnite: Battle Royale looks a lot like PUBG, enough that Bluehole spoke up about it, and it’s free. If the two games are so similar, then why would you opt to pay for one when you can get one of them for free?

Like we said earlier, PUBG still can be quite buggy on PC, even on high-end rigs. There’s no telling for certain how the game will run on Xbox One, considering it boasts considerably lower specs than many PCs out there. The release of the Xbox One X should help things but all signs are pointing to that being a niche console, much like the PS4 Pro. If Fortnite: Battle Royale launches free of bugs, receives consistent updates and attention and has a strong playerbase at launch, then look out PUBG.

Fortnite: Battle Royale launches September 26 on Xbox One, PS4 and PC. PlayerUnknown’s Battlegrounds is out now for PC and will be arriving on Xbox One in the near future. We can only imagine a PS4 version is coming eventually. 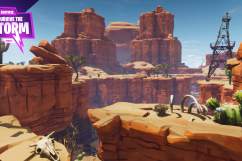 Fortnite: Top Tips & Tricks You Need to Know for Survive the Storm Update