While Good Game by Game Grumps had a strong start with its first two episodes, episode three felt like the show was coasting. The comedy, while not bad by any means, also wasn’t all that good. The only thing saving it was the good message at the end with Sam’s character arc. Despite all that, I was hopeful that the series would only go up from there, especially since we’re over the halfway point. I can safely say that I wasn’t disappointed so far if episode four is anything to go by.

In an effort to gain more fans, the team decides to hold a livestream party, finding stiff competition with their rivals Lucid Nightmare and getting into even more trouble along the way.

The comedy was on point in this episode. It was very on brand for Game Grumps, featuring a ton of fun and goofy gags that will feel familiar to any fan of the Let’s Play channel (which I assume is most of the audience). Not only that, but it used the setup of a livestream to make for some very unique and fresh jokes. There’s even great goofs you may miss if you’re not paying attention, like the messages in the chat threads off to the sides of the livestreams.

Speaking of chat threads, we not only got a great dose of comedy but also a harsh reality check. Sam gets blasted in the chat threads with racist and threatening messages (a moment that especially hits hard coming off of the recent PewDiePie controversy). Kamal is up to his bad behavior again, which lands him in hot water when he is accused of sending police after Lucid Nightmare’s stream. While I love that this series is willing to tackle such tough topics as prejudice and swatting, these plot points are immediately swept away for the main conflict of everyone having to break it to Lorenzo that he’s not as good a Killcore player as he think he is. While everything with Lorenzo was great, the more serious topics felt so dissonant when compared to everything else in the episode. They needed to be more fleshed out and focused on like they were in episode two.

This episode represents everything I love about Good Game so far. It’s a goofy celebration of eSports and its culture that’s not afraid to dive into its dark side. Going forward, I’d like to see the series have its more weighty topics feel less tacked on and get the treatment they deserve. Regardless, episode four gives me hope that the series will still keep providing good drama and fun until the end. 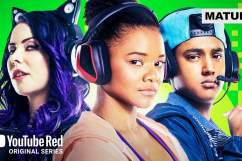