It feels like the NBA season has just ended but here we are just under two months away from it being back again. Even more good news for NBA fans is that NBA 2K18 is available starting tomorrow for some. In order to fire up your season or MyCareer tomorrow, you will have to pre-order the game. Since pre-ordering will give players four day early access, that means you will have to pre-order the game today if you want to take advantage of all that extra time.

The early access isn’t just a snippet of the full game either but it is in fact the real deal. Players will have full access to every mode from MyGM, MyPlayer to the much hyped up and talked about Neighborhood mode. The new mode looks to be a game changed in the sports video game landscape as it allows players to enter a huge looking hub world and interact with other people in real-time as they boost their attributes at the gym or get a new haircut at the barber shop. Think of it as all the side stuff you could do in Grand Theft Auto: San Andreas without all the shooting and guns.

If you do decide to pick up the game early, you’ll likely be finding yourself with a rare copy of the game. Kyrie Irving, then of the Cleveland Cavaliers, was announced as the cover athlete before he was traded to the Boston Celtics last month. 2K Sports is still selling the Cavaliers cover until it runs out before replacing it with a new cover with Irving in a Celtics jersey. All of the in-game menus have already been changed to reflect Irving’s new team.

If pre-ordering is not an option for you, there’s still a way to get some of that sweet 2K action in your life without spending a dime. PS4 and Xbox One owners can download the NBA 2K18 Prelude which will give players the ability to get started with their MyPlayer. You will have the opportunity to scan your face if you choose and play a couple games with that character. You can only do this once so you’re maybe only getting an hour of content if you really stretch it but it will help scratch that itch.

You could also decide to download the mobile companion app – MyNBA 2K18.  Features include the ability to watch 2KTV at any time straight from your mobile device. 2KTV is the show that you see playing on the home screen of recent 2K games and right before you start up a game. You may even get to answer some trivia questions to earn more VC.

NBA 2K18 releases September 19 for Xbox One, PS4, Xbox 360, PS3, PC and Nintendo Switch. As mentioned before, early access for pre-orders starts tomorrow. We’ll see you in the neighborhood. 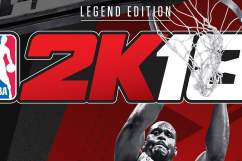