Blizzard released a video showing the behind the scenes process for their latest animated short, “Rise and Shine.”

Director Jeff Kaplan explains that the team knew while developing Overwatch that there wasn’t going to be a lot of room for storytelling in the game. However, they wanted a way to introduce all the characters and universe, and one of the avenues to do that was through the animated shorts.

For “Rise and Shine,” the team wanted to explore the tragedy behind Mei’s optimism and cuteness.

“It was extremely important to dig into who is Mei the human being and how does she become the hero that she is,” Kaplan said. “All of that is as important as how much damage does the left click on her gun do.”

The video also gives us some good shots of the storyboards and the animating process for the animated short. They also go through the though process behind every step in the short’s story.

“Did we connect with our players?” said George Krstic, head of story for creative development, in regards to the team’s mission statement for the short. “Did you feel something? Are you moved? If
this collection of pixels that’s moving around on a cell phone can make you feel something, then we’ve done our job.”

You can watch the full animated short here:

The short was released during Gamescom 2017 and tells the story of playable hero Mei, a climatologist stuck in cyro-sleep during a failed experiment. She wakes from her sleep for over nine years to find her crew dead and Overwatch disbanded. Now she must reconnect with a mysterious signal sent her way.

Before the short’s release, Overwatch fans got a glimpse of the new Junkertown map as well as an animated short featuring Junkrat and Roadhog as they’re kicked out of the Australian town home to bandits and the Queen of Junkertown. 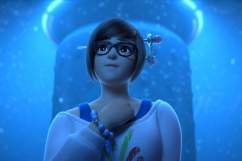