PewDiePie is one of the most popular YouTubers in the world with a whopping 57 million subscribers on YouTube at the time of this writing. With an audience that big, you have to be careful about what you say and unfortunately PewDiePie made another slip up a few days ago.

PewDiePie made the mistake of uttering the N word during a recently PlayerUnknown’s Battlegrounds stream. The slur came after taking shots from an enemy which prompted him to say “what a f*cking n*gger” before he quickly tried to backtrack on the comment. At that point, the damage was done.

Today, the YouTuber posted a video containing his apology.

The video is just over a minute and half and it doesn’t feature any jokes or him trying to defend his position. He actually sounds sincere which is good to hear since he has been in hot water not only from this but from recent Nazi-related jokes.

“You probably won’t believe this when I say this, but, whenever I go online and I hear other players use the same kind of language that I did, I always find it extremely immature and stupid,” PewDiePie said. “And I hate how I now personally fed into that part of gaming as well.”

He does say that the comments were made in the heat of the moment, which seems to echo the comments made by Ian Miles Cheong, a gaming journalist.

“It was something that I said in the heat of the moment,” PewDiePie continued. “I said the worst word I could possibly think of, and it just sort of slipped out. I’m not going to make any excuses for why it did, because there are no excuses for it. I’m disappointed in myself, because it seems like I’ve learned nothing from all these past controversies. And it’s not that I think I can say or do whatever I want and get away with it. I’m just an idiot. But that doesn’t make what I said, or how I said it, OK.”

We’ll have to see how long it takes for PewDiePie finds himself as the center of another controversy. The calendar starts over at zero today. Even though PewDiePie lost sponsors as a result of the last incident, it hasn’t appeared to affect his viewership all that much. 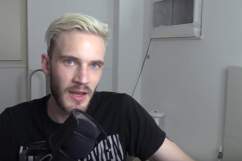