UB Burst is exclusive to Ultra Sun and UB Assembly is exclusive to Ultra Moon. UB Burst’s design resembles a clown and it appears to have an all new, exclusive attack with its own animation in which it detaches its head which explodes like a firework. UB Assembly appears to specialize in defense as it’s design resembles a brick towner and it has the move Iron Defense which raises the defense stat by two stages. Both Ultra Beasts will most likely have the same ability all the other Ultra Beasts have, Beast Boost, which raises the highest stat of the Pokemon by one point every time they knock out an opponent. Not much else is known about them.

Update – October 5: A new trailer revealed the more information about the ultra beasts. UB Burst will be fire/ghost-type and will have the move Mind Blow which looks very powerful but also damages the user quite a bit. UB Assembly will be rock/steel-type. A brand new Ultra Beast was announced in the trailer called UB Adhesive, which is poison-type. All of the announced ultra beasts will have the ability Beast Boost, as we predicted.

More info was shared on the official Pokemon Twitter account. Each of the stones that make up UB Assembly is actually a separate life form. UB Burst’s head is made up of sparks and it has the ability to remove and explode it.

Lycanroc will get an exclusive Z-Move called Splintered Stormshards. All three forms can use the move and the background colors of the Z-Move animation changes depending on which form you use. The special Rockruff that evolves into Dusk Form Lycanroc is given to players who buy Pokemon Ultra Sun and Moon by January 10, 2018. If you purchase and download the digital version of the games by January 10, you’ll get 12 Quick Balls.

Pokemon Ultra Sun & Ultra Moon will be coming to Nintendo 3DS on November 17, 2017. A Pokeball edition of the New Nintendo 2DS XL is coming November 3. 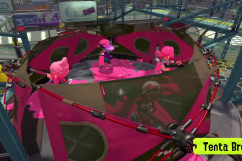