Tonight’s Salmon Run session in Splatoon 2 will have a twist, according to the game’s official Tumblr page.

The shift, which starts tonight at 5 p.m. PT/ 8 p.m. ET, will have randomized weapons every time you play a game. This is different from the usual shifts for the game mode where four teammates share from a set pool of four weapons and switch between them each round.

In addition, the weapon pool includes a personal weapon belonging to Mr. Grizz, the owner of the corporation you work for in Salmon Run.

Back in August, the existence of Grizzco-branded Blasters, Chargers, and Brellas was found in a datamine of the game’s files. So the personal weapon referenced in the Tumblr post may be one of the weapons found in the datamine.

The datamine also found evidence of new maps coming to Salmon Run, internally named “Shakehouse” and “Threepoints.” The files for these maps were introduced in the 1.1.1 update to the game and are the last of the four planned stages for Salmon Run as of version 1.0.0, according to OatmealDome who was one of the Reddit users behind the datamine. However, tonight’s Salmon Run shift will not include new maps.

We’ll also get the Kelp Dome stage tonight, as promised by the recent Nintendo Direct. A fan-favorite from the original game, Kelp Dome is getting added grates to fall through as well as a bit of extra turf on each team’s side.

The Nintendo Direct also revealed a new Brella weapon coming soon to the game. The Tenta Brella features a much wider shield than the standard Brella weapon which also appears to move much slower when shot forward. 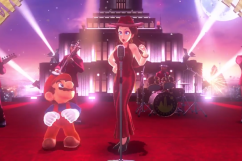