Splatoon 2’s second Splatfest in Japan is going to be is going to ask players to vote for either McDonalds French Fries or Chicken McNuggets.

The Splatfest will begin in Japan on September 9 at 3 p.m. JST and will last a full day.

Maybe Japan can use some of the ketchup or mayo from the last Splatfest for this particular one.

Splatfest is when players pick from two teams and then duke it out with one another in Turf War matches, where the team who has the most of their colored ink on the map wins. After the Splatfest, teams are judged based on how many people signed up for their team and how many matches were won for both solo and team matches. People on the winning team get slightly more Super Snails than people on the other team, which are used to upgrade gear.

The new map Manta Maria will be in the Splatfest rotation this time along with the special level Shifty Station with a different layout from the last Splatfest. The Forge Splattershot Pro will also be added to the game for Splatfest, which is a Splattershot Pro with Suction Bombs and the new Bubble Blower ability.

What would you pick, McDonalds French Fries or Chicken McNuggets? Let us know in the comment section below. Personally, I’d pick McNuggets. The fries are alright, but the nuggets are next level and pair wonderfully with the buffalo sauce. 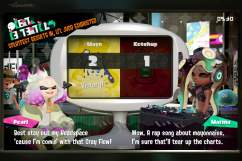