Update – September 3: The results are finally in. It looks like Team Flight beat Team Invisibility.

Update: According to a blog post on the official Splatoon Tumblr, the delay is caused by the results of the American Splatfest being combined with the European Splatfest results. The Splatfest in Europe ends at 10 a.m. ET and the results are expected to be released at around 12:00 p.m. ET.

We previously mentioned that neither Nintendo nor the game’s official channels mentioned anything about the delay. While they did not mention anything about it after the Splatfest was over, they did in fact mention it through the Tumblr page. Our sincerest apologies.

At the time of writing, it’s been over three hours since Splatoon 2’s Splatfest for Flight vs. Invisibility ended. The results have yet to be published.

The last Splatfest, Mayo vs. Ketchup, got its results two hours after the end of the fest. The Splatfest before that, Cake vs. Ice Cream, got is results in an hour after the fest ended.

The delay has fans all over waiting in anticipation.

CAN U TELL THAT I AM IMPATIENT??? #WhoWon #Splatfest #Splatoon2 #NintendoSwitch pic.twitter.com/96lXdNHasR

Where's the Results? It should get announced by now… :(#Splatfest #Splatoon2

We will most likely get the results in the morning. We’ll give you an update when we do get an update.

Splatfest is where players volunteer to be on one of two teams and then battle it out with the other team in Turf War matches. This time, people got to choose between their favorite superpower, flight or invisibility. People on the winning side earn slightly more Super Sea Snails than people on the other team, which are used to add new ability slots to gear or replace an ability and earn you the old ability chunk making them a precious commodity.

Mayo caught up to Ketchup during the last Splatfest. After being smashed during the popularity contest, Team Mayo won after having more wins in both solo and team matches than Team Ketchup. The Splatfest before that, Cake vs. Ice Cream, had team Ice Cream take the cake due to them having more popularity and solo match wins than Cake.

Here’s a list of all Splatfest results in one convenient place.

If you missed this Splatfest event, don’t worry as Nintendo said that Splatfest support will continue for at least two years after launch. You’ll have plenty more time to compete in Splatfests for those precious Super Sea Snails. 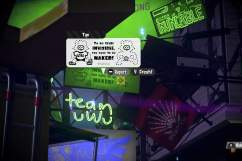