Another day, another Light Side character coming to Star Wars: Galaxy of Heroes – at least this one isn’t a Rebel. This time, everyone’s favorite droid from The Force Awakens, BB-8, is entering the game. As expected, this droid will be a pretty difficult one to grab.

Now we have both good news and bad news about this. The good news is that there are only five characters to choose from for this event so you won’t have to worry about putting together the most efficient team or anything like that. The bad news is some of these characters are very hard to get. Let’s take a look a who you’ll be needing for this event and where to find them.

Captain Phasma, Kylo Ren and even First Order Officer should come easy if you focus on them daily. However, First Order TIE Pilot and Stormtrooper could require months of grinding if you are a free-to-play player. If you’re willing to drop some money on the game then this could come quicker but it won’t be cheap. The hardest part about this won’t even be unlocking them but it will be getting them to 7* to unlock the fully powered up BB-8. To help you do this, Galaxy of Heroes is offering double drop rates on all First Order nodes from September 22 to September 25.

Kylo Ren’s zeta ability makes this event pretty easy, provided your characters are at a proper gear level. In fact, some players have even reported he is able to complete the event on his own without the help from his First Order allies. Of course, this can be accomplished without his zeta so don’t worry if you don’t have it.

While BB-8 will be nice to have, if you don’t have the characters ready for the event we’re sure this won’t be the last time we see BB-8. The Last Jedi comes out later this year so we expect to see more movie-themed events coming around. With the return of Star Wars Rebels approaching, we might even see another Thrawn event pop up. 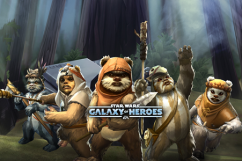 Star Wars: Galaxy of Heroes Territory Battles: What You Need To Know