A new game mode may be coming to Super Mario Run, a source told Nintendo Wire.

The source was pushed an update for the game before it was pulled from the iOS App Store possible for an update.

The source describes a brand new gamemode called “X 10 Run.” In X 10 Run, you have to rescue Princess Daisy by going through 10 quick, 10-second levels where the player collects three rainbow coins before reaching the Goal Pipe. The more rainbow coins collected, the closer you are to hitting a rainbow question block that gives out bigger items for Kingdom Builder such as Toad Houses. You need Toad Rally Tickets to play the new mode. The source told Nintendo Wire that there was no penalty for failing to collect all three coins. You were rewarded just for completing levels.

Halfway through a set of 10 levels, players find a second playable character on the map and must switch to that character for the next five levels. After bursts of 10 levels, you can hit a normal question block for a standard Kingdom Builder item such as trees or flowers.

The source was only able to play two sets of 10 levels. They speculate that Daisy could be rescued after completing three sets though this is still not clear. Remixed versions of tracks from previous Mario games also play during the mode featuring a female singer.

The source also said that there was a new icon of the app for the update, featuring “Mario winking and looking to his left.” A new loading screen shows Mario jumping with the bottom left of the screen torn off and displaying a rainbow question block.

While Nintendo Wire said that the source was trusted, this information has yet to be verified. They did reach out to Nintendo for confirmation.

Apple will be holding their iPhone event on September 12 at 10 a.m. PDT / 1 p.m. EST, so the new game mode could be announced then. 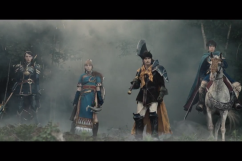