Detective Sebastian Castellanos has been to Hell and back.

During his debut within 2014’s The Evil Within, players journeyed alongside the strong willed cop as he dealt with the mental anguish and outlandish foes that existed within one’s tortured mind. After contending with the horrors that saw fit to dismember him, Castellanos survived the whole ordeal but sadly sought therapy within a beer bottle. After getting word that someone he loves is actually alive and trapped within another nightmare prison, Castellanos decides to attach himself to the device that gave him so much trouble before.

Producer Shinji Mikami, Tango Gameworks and Bethesda Softworks are set to make sure that The Evil Within 2 raises the bar within the survival horror sub-genre. Before this year’s Friday the 13th in October arrives, make sure you’re well prepared for what awaits you in The Evil Within 2.

1. You’ll Play as Castellanos Once Again as He Seeks Out His Daughter’s Whereabouts Within “STEM”

Detective Castellanos’ horror-filled venture in the first game transpired after he got hooked up to a device called “STEM.” The shadowy organization behind its creation, Mobius, had intentions of using STEM for good intentions. STEM was meant to produce a safe mental space that exists due to multiple minds being hooked up the device. But Castellanos and his allies’ brains ended up connected to STEM and transported to nightmare fueled space created by a troubled genius named Ruvik (Ruben Victoriano). Check out the story breakdown video posted above to learn even more about the intricacies behind the first game.

The Evil Within 2 takes place three years after the traumatic events of the first game. Castellanos ends up losing his job within the police department. In an act of desperation, he makes it a habit to find some closure about what he went through. All the while, he still has to deal with the loss of his family. Eventually, Castellanos’ former partner Juli Kidman contacts him to let him know that his daughter Lily still lives. However, she’s in the hands of Mobius and being used to power a new world within STEM – “Union.” Castellanos is forced to head back into the horrifying environments created by STEM in order to rescue his daughter and learn more about Mobius’ conspiracies.

2. The Locales You’ll Inhabit are Less Linear, More Open and Full of Side Activities to Discover

Unlike the first game, The Evil Within 2’s main Union locale features more open explorable maps. It’s now possible for players to find alternate methods towards completing their missions. Plus there’ll be plenty of side activities to complete along the way. One of the items being introduced to this sequel is the “Communicator.” This tool aids Castellanos by highlighting all the important elements (resources, enemies and objective markers) that exists within Union. Castellanos will once again confront enemies head on, employ stealth tactics and solve puzzles as he makes his way through Union.

3. Just Like its Predecessor, The Evil Within 2 Emphasizes Careful Resource Management and Weapon/Character Upgrading

For anyone who managed to fully make their way through the first game, the upgrading room and its mechanics should be familiar to you. Those elements make a return for the sequel. Castellanos will transport himself to another area by utilizing a broken mirror. Crafting new items and ammo can be performed on a workbench, while upgrading Castellanos himself is done by trapping him within the confines of a insane asylum chair.

Players have the ability to improve the following five statistics – Castellanos’ health, stealth, combat, recovery and athleticism. Weapons can also be customized, plus you can also create items while out in the open world. Castellanos’ armory includes a handgun, shotgun, a crossbow that can be loaded with different arrow types and several other unannounced weapons.

4. An Army of New Supernatural Horrors Awaits You Within STEM…

There’s a whole lot of walking terrors present within Union. Castellanos has to defend himself from monsters such as “The Guardian,” a massive maniacal beast that stalks him and attacks with a buzzsaw. Chances are high that you’ll come into contact with creatures such as that one on multiple occasions. Along with those horrific monsters, Castellanos will also confront more human threats such as the mystery man known as “The Photographer.” His motives will eventually come into focus the more you make your way through Union. Human “monsters” like him and Father Theodore will be just as dangerous as the more paranormal terrors that exist within Union.

5. Pre-Ordering The Evil Within 2 Means You’ll Get Some Helpful Items to Start Your Journey With

For anyone who pre-order’s The Evil Within 2, they’ll be granted with some super helpful items from the very start of the game. Those items include the Burst Handgun, various crafting materials and a Medical Case that includes health restoring syringes.

Buy The Evil Within 2 here. 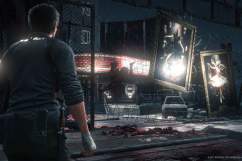 The Evil Within 2 Review: Confronting the Horrors of Union