Age of Empires: Definitive Edition received a definitive release date of October 19, 2017 during a stream at Gamescom 2017. That day has since come and gone and you might be wondering where exactly is Age of Empires: DE?

As it turns out, the game was actually announced as being delayed last week in a post on Age of Empires official website. Instead of releasing the game on that date, the team decided to keep inviting players to the beta which will allow for more testing across the single player and multiplayer modes. This might be a bit disappointing to many who were looking forward to the game but it sounds like the decision was made to release a better game on launch.

A new release date has not been revealed but the team is targeting early 2018. The Windows Store page now lists a placeholder date of December 31, 2018 and that is not the real release date. The price will still remain the same at $19.99. You still have the option to pre-order the title on the Windows Store. You can read the full post below regarding the delay.

When we set out to re-release the original Age of Empires (as ‘Age of Empires: Definitive Edition’), we had many debates over the extent of restoration that we should undertake. The challenge of re-releasing a classic is just that: it’s a classic and it deserves to be treated with careful reverence. At the same time, in a living, thriving genre, norms continually evolve, technology advances, and player expectations change. This is as true for RTS as for any other genre. So, the challenge is to recreate the experience not as it *actually* was but as we all remember it. How can we modernize the game while preserving the fun, discovery and magic of that first experience?

To that end, rather than a final release of Age of Empires: Definitive Edition on October 19, we will instead be inviting thousands more players from the community into our closed beta between now and launch to allow for more in-depth testing across single player campaign, multiplayer balance, fine-tuning the lobby, etc.

We don’t have a final release date to share quite yet, but are targeting early 2018. In the meantime, we will be actively engaging with everyone participating in the closed beta to gather additional feedback, set up multiplayer sessions, and ensure that the Age of Empires: Definitive Edition that we are delivering is the Definitive Edition that you want.

Age of Empires 1 isn’t the only game receiving the definitive edition treatment. At Gamescom, the team announced both Age of Empires 2 and Age of Empires 3 will be joining their predecessor and will each receive a remaster. We’re a bit unclear on how that will work with Age of Empires 2 given it has the HD edition available on Steam and it still receives updates with regularity.

At least we still have Age of Empires 4 to look forward to in the future. The next few years are going to be great for Age fans. 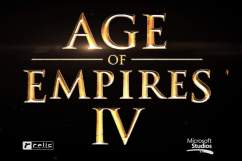 Age of Empires 4: What Era Could It Be In?

Read More
PC Games
It's not coming this month.